Flag of Mozambique facts for kids 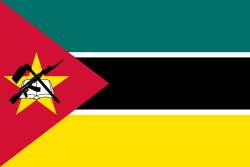 It has a horizontal tricolour of green, white-fimbriated black and yellow with the red isosceles triangle based on the hoist-side bearing the yellow five-pointed star that bears an AK-47 assault rifle with the bayonet attached to the barrel crossed by the hoe superimposed on an open book.

All content from Kiddle encyclopedia articles (including the article images and facts) can be freely used under Attribution-ShareAlike license, unless stated otherwise. Cite this article:
Flag of Mozambique Facts for Kids. Kiddle Encyclopedia.