The Republic of Zimbabwe is a country in the southern part of the continent of Africa. Its capital city is Harare.

Zimbabwe is surrounded by other countries, and so it has no coast on the sea. This type of country is called landlocked. The countries that surround Zimbabwe are Zambia, Botswana, South Africa and Mozambique.

Zimbabwe is home to the famous waterfall, Victoria Falls, which are a feature of the river Zambezi and also the Great Zimbabwe, the ancient architectural monument from which the country was named after.

The country is mostly savanna. In the east it is moist and mountainous with tropical evergreen and hardwood forests. Trees include teak and mahogany, knobthorn, msasa and baobab. Among the many flowers and shrubs are hibiscus, spider lily, leonotus, cassia, tree wisteria and dombeya. 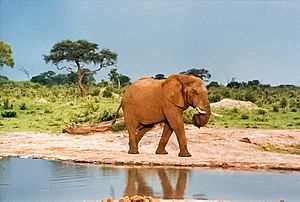 There are around 350 species of mammals in Zimbabwe. There are also many snakes and lizards, over 500 bird species, and 131 fish species.

The area that is now Zimbabwe was added to the British Empire around 1890. Zimbabwe is also known by its old name of Rhodesia. In 1965, it became an independent country when Prime Minister Ian Smith announced the Unilateral Declaration of Independence(U.D.I). The government was mostly controlled by the white population, similar to South Africa at the time. African citizens were given full equality in 1980, and the country's name was officially changed to Zimbabwe. Robert Mugabe led the country as the Prime Minister and President for 37 years. Though Mugabe was elected fairly at first, he became a dictator, and had put in place a number of cruel and disastrous laws. On November 21, 2017, Mugabe resigned as President of Zimbabwe.

The country Zimbabwe has a mixture of languages; Shona, Ndebele, Venda, Manyika, Nyanja, Chagani, and a unique-unified Zimbabwean English.

Zimbabwe uses the currencies of several other countries. The government uses the United States dollar. The economy is currently in a bad situation. Foreign currency reserves are at very low levels, and the Zimbabwean Dollar has become very devalued. Just recently, three zeroes were taken off the Zimbabwean dollar (for example, $1,000,000 (one million dollars) would become $1000 (one thousand dollars)). Many observers link this to Mugabe's controversial Land Reform programme.

On November 15, 2017, President Robert Mugabe was placed under house arrest as Zimbabwe's military took control in a coup. On November 21, 2017, Mugabe resigned the Presidency. 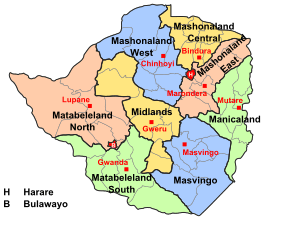 Zimbabwe is divided into 8 provinces and 2 cities that are the same as a province.

Football is the most popular sport in Zimbabwe. Rugby union and cricket are also popular. Zimbabwe has won eight Olympic medals.

All content from Kiddle encyclopedia articles (including the article images and facts) can be freely used under Attribution-ShareAlike license, unless stated otherwise. Cite this article:
Zimbabwe Facts for Kids. Kiddle Encyclopedia.