Northern Ndebele is an African language. It is also called Sindebele, Zimbabwean Ndebele or North Ndebele, and formerly known as Matabele. It is part of the Nguni group of Bantu languages. It is spoken by the amaNdebele, Ndebele and Matabele people of Zimbabwe. It is also known as siNdebele or simply Ndebele.

Ndebele is related to the Zulu language spoken in South Africa. The Ndebele people of Zimbabwe are descended from followers of the Zulu leader Mzilikazi. Mzilikazi and his people left kwaZulu in the early 1800s during the Mfecane. They travelled North, past what is now Gauteng, Mpumalanga and Limpopo, in South Africa, and into Zimbabwe and Botswana. There are Sindebele speakers in many places in Southern Africa. 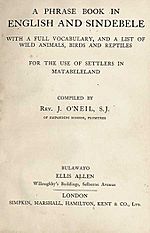 Title page of one of the earliest Sindebele phrase books

It is relatively easy to pronounce Ndebele words because the vowel sounds are constant. (That is, each vowel has basically one sound.) The accent is usually on the second-to-last syllable.

In Ndebele, there are three click sounds. They are shown with the letters c, q and x.

The q sound is made by raising the back of the tongue to touch the soft palate and touching the gums with the sides and tip of the tongue. The centre of the tongue is pressed down and the tip moved quickly away from the gum. The resulting sound is like the "pop" heard when quickly removing a cork from a bottle. Some words with this sound are qalisa (start) and qeda (finish).

These are basic phrases in Ndebele.

All content from Kiddle encyclopedia articles (including the article images and facts) can be freely used under Attribution-ShareAlike license, unless stated otherwise. Cite this article:
Northern Ndebele language Facts for Kids. Kiddle Encyclopedia.