In 1994, it became one of South Africa's 11 official languages. Like other Bantu languages, Zulu is written using the Latin alphabet.

Where it is spoken 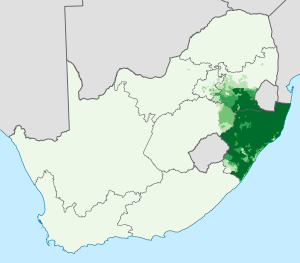 Where isiZulu is spoke in South Africa: proportion (percentage) of the population that speaks isiZulu at home. 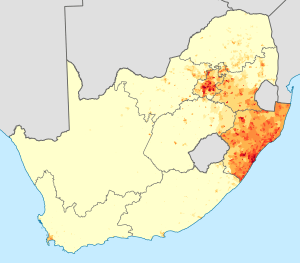 Where isiZulu is spoken in South Africa: density of isiZulu home-language speakers.

Zulu belongs to the Nguni group of Bantu languages. Zulu migrants (people who move from place to place) have taken the language to other regions. There are now Zulu speakers in Zimbabwe, Lesotho, Mozambique, Malawi, and Swaziland.

People who speak Xhosa can understand most Zulu. The opposite is also true: Zulu speakers can understand Xhosa. Xhosa language is the most common language spoken in the Eastern Cape of South Africa.

Zulu and all other native Southern African languages was at first an oral language. It was not written down until missionaries came from Europe. These missionaries used the Latin alphabet to write the Zulu language. The first Zulu grammar book was published in Norway in 1850 by Hans Paludan Smith Schreuder.

Before 1994, the official languages of South Africa were English, Dutch, and Afrikaans. During Apartheid, Zulu was spoken commonly in the Kwazulu bantustan. All education, however, at the high school level was in English or Afrikaans.

After Apartheid ended in 1994, Zulu became one of the official languages in South Africa. The SABC first started showing Zulu-language television and news programs in the 1980s. There are many Zulu radio stations and newspapers available, mostly in the Kwazulu-Natal province and Johannesburg. The first full-length feature film in Zulu was Yesterday. It was made in 2004 and nominated for an Academy Award (Oscar).

In The Lion King movie, the "Circle of Life" song has many Zulu phrases in it. Some of these phrases are:

Other Lion King songs also had Zulu phrases in them.

There are two main types of Zulu. One type is called standard Zulu, and it is taught in schools. Standard Zulu is also called "deep Zulu" (Zulu: isiZulu esijulile). Standard Zulu is a purist language. This means that new ideas are described using words that are derived from other Zulu words.

The other type of Zulu is called urban Zulu (Zulu: isiZulu sasedolobheni). Urban Zulu is the kind of Zulu spoken by people who live in cities. Urban Zulu uses loan words borrowed from other languages to describe new ideas. Most of these loan words come from English.

Some of these different words for new ideas in Standard and Urban Zulu are listed here:

Zulu place names occur in the locative form most of the time. A place name is both a preposition and a name. Changing the prefix of the place name changes the preposition.

For example, the Zulu name for Johannesburg is iGoli. The word eGoli means to/at/in/from Johannesburg. The root word Goli means "Johannesburg," but doesn't mean anything by itself in Zulu.

Most of the time, changing the i- or u- prefix to the e- prefix changes the meaning like this. In some cases, like with Durban, the name changes too.

When the word Zulu has a prefix that is not "isi-", it means a lot of different things. This is a table that shows how the meanings of the word changes:

All content from Kiddle encyclopedia articles (including the article images and facts) can be freely used under Attribution-ShareAlike license, unless stated otherwise. Cite this article:
Zulu language Facts for Kids. Kiddle Encyclopedia.