Today KwaZulu Natal is the home of the Zulu nation. It is called the "garden province." Two natural areas, the iSimangaliso Wetland Park and the uKhahlamba Drakensberg Park, have been declared UNESCO World Heritage Sites.

KwaZulu-Natal is located in the southeast of South Africa. It borders three other provinces, the Indian Ocean, and the countries of Mozambique, Swaziland, and Lesotho. Its capital is Pietermaritzburg and its largest city is Durban. 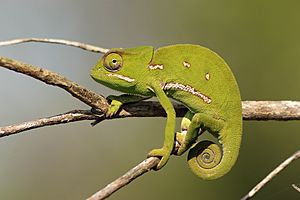 KwaZulu-Natal is about 92,100 square kilometres (35,600 sq mi) in area, making it about the same size as Portugal. The province has three different geographic areas. The lowland region lies along the Indian Ocean coast. It is very narrow in the south and widens in the northern part of the province.

The central region is called the Natal Midlands. The midlands are hilly plateaus that rise toward the west.

The third region is mountainous. The two mountain ranges are the Drakensberg Mountains in the west and the Lebombo Mountains in the north. The Drakensberg mountains are basalt cliffs that rise 3,000 m (9,800 ft) near Lesotho. The Lebombo Mountains are ancient granite mountains that run south from Swaziland. The Tugela River flows west to east across the center of the province and is the region's largest river. 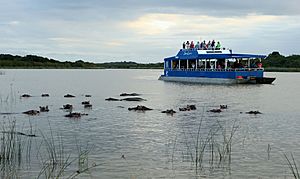 The coastal areas have dense stands of subtropical trees and shrubs and deep ravines. Afromontane Forest grows on the steep sides of the ravines. The midlands have moist (wet) grasslands and small pockets of Afromontane Forest. The north is mostly wet savanna. The Drakensberg region is alpine grassland.

One of the biggest problems in the province is HIV infection. The country of South Africa has more HIV-positive citizens than any other country in the world. KwaZulu-Natal has the highest rate of HIV infection of all of the provinces. According to UNAIDS in 2009, the infection rate is 39%.

Many people die from complications from AIDS. Infected people in KwaZulu-Natal do not have the health care, medicine, and proper food they need to stay healthy. HIV/AIDS has slowed economic growth by destroying human capital, the ability of people to make money in society.

All content from Kiddle encyclopedia articles (including the article images and facts) can be freely used under Attribution-ShareAlike license, unless stated otherwise. Cite this article:
KwaZulu-Natal Facts for Kids. Kiddle Encyclopedia.