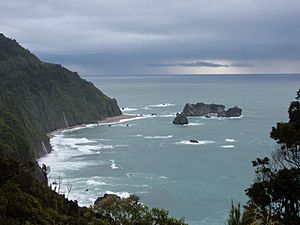 Rugged coastline of the West Coast Region of New Zealand

A coastline or a seashore is the area where land meets the sea or ocean, or a line that forms the boundary between the land and the ocean or a lake.

The term coastal zone is a region where interaction of the sea and land processes occurs. Both the terms coast and coastal are often used to describe a geographic location or region; for example, New Zealand's West Coast, or the East and West Coasts of the United States. Edinburgh for example is a city on the coast of Scotland..

Waves erode coastline as they break on shore releasing their energy; the larger the wave the more energy it releases and the more sediment it moves. Coastlines with longer shores have more room for the waves to disperse their energy, while coasts with cliffs and short shore faces give little room for the wave energy to be dispersed. In these areas the wave energy breaking against the cliffs is higher, and air and water are compressed into cracks in the rock, forcing the rock apart, breaking it down.

Like the ocean which shapes them, coasts are a dynamic environment with constant change. The Earth's natural processes, particularly sea level rises, waves and various weather phenomena, have resulted in the erosion, accretion and reshaping of coasts as well as flooding and creation of continental shelves.

The coast and its adjacent areas on and off shore are an important part of a local ecosystem: the mixture of fresh water and salt water (brackish water) in estuaries provides many nutrients for marine life. Salt marshes and beaches also support a diversity of plants, animals and insects crucial to the food chain. 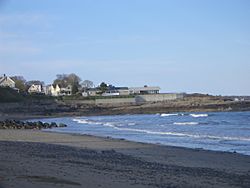 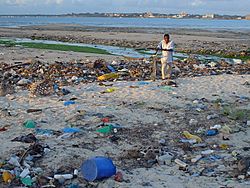 More and more of the world's people live in coastal regions. Many major cities are on or near good harbors and have port facilities. Some landlocked places have achieved port status by building canals.

The coast is a frontier that nations have typically defended against military invaders, smugglers and illegal migrants. Fixed coastal defenses have long been erected in many nations and coastal countries typically have a navy and some form of coast guard.

Coasts, especially those with beaches and warm water, attract tourists. In many island nations such as those of the Mediterranean, South Pacific and Caribbean, tourism is central to the economy. Coasts offer recreational activities such as swimming, fishing, surfing, boating, and sunbathing. Growth management can be a challenge for coastal local authorities who often struggle to provide the infrastructure required by new residents.

Threats to a coast

Coasts also face many human-induced environmental impacts. The human influence on climate change is thought to contribute to an accelerated trend in sea level rise which threatens coastal habitats. It is believed that melting Arctic ice will cause sea levels to rise and flood coastal areas.

Some of the animals live along a typical coast. There are animals like puffins, sea turtles and rockhopper penguins. Sea snails and various kinds of barnacles live on the coast and scavenge on food deposited by the sea. Most coastal animals are used to humans in developed areas, such as dolphins and seagulls.

There are many kinds of seabirds on the coast. Pelicans and cormorants join up with terns and oystercatchers to forage for fish and shellfish on the coast. There are sea lions on the coast of Wales and other countries.

Coastal areas are famous for their kelp beds. Kelp is a fast-growing seaweed that grows up to a metre a day. Corals and sea anemones are true animals, but live a lifestyle similar to that of plants. Mangroves, seagrasses and salt marsh are important coastal vegetation types in tropical and temperate environments respectively.

All content from Kiddle encyclopedia articles (including the article images and facts) can be freely used under Attribution-ShareAlike license, unless stated otherwise. Cite this article:
Coast Facts for Kids. Kiddle Encyclopedia.