Kelp are large seaweeds, belonging to the brown algae and classified in the order Laminariales. Despite their appearance they are not grouped with the normal aquatic or land plants (kingdom Plantae). There are about 30 types. Kelp grows in underwater forests (kelp forests) in clear, shallow, oceans, requiring nutrient rich water below about 20 °C (68 °F), it offers a protection to some sea creatures, or food for others.

It is known for its high growth rate and can grow grows up to 30 centimetres (10 inches) per day, to a total length of over 60 metres (200 feet). Kelp grows in the form of long stalks, with leaf-like blades at regular intervals. The blades are kept afloat by gas-filled bladders.

Kelp may develop dense forests with high production, biodiversity and ecological function. Along the Norwegian coast these forests cover 5,800 square kilometres (2,239.39 sq mi), and they support large numbers of animals. 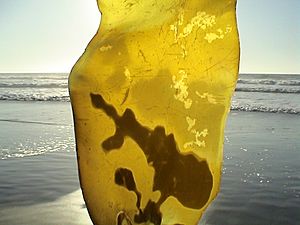 Kelp ash is calcined and rich in iodine and alkali. In great amount, kelp ash can be used in soap and glass production. Alginate, a kelp-derived carbohydrate, is used to thicken products such as ice cream, jelly, salad dressing, and toothpaste, as well as an ingredient in exotic dog food and in manufactured goods. Alginate powder is also used frequently in general dentistry and orthodontics for making impressions of the upper and lower arches.

Kelp has a high rate of growth and its decay is quite efficient in yielding methane, as well as sugars that can be converted to ethanol. It has been proposed that large open-ocean kelp farms could serve as a source of renewable energy.

All content from Kiddle encyclopedia articles (including the article images and facts) can be freely used under Attribution-ShareAlike license, unless stated otherwise. Cite this article:
Kelp Facts for Kids. Kiddle Encyclopedia.