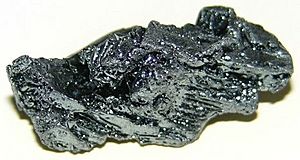 Iodine is a chemical element. Its atomic number (which is the number of protons in it) is 53, and its atomic mass (the number of protons plus neutrons) is 127. It is part of the Group 7 (halogens) on the periodic table of elements and its electronic configuration is 2,8,8,18,17. It is a nonmetal. 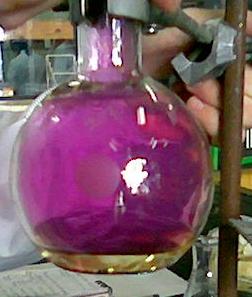 Iodine is a dark purple-black solid. It is also a nonmetal and a halogen. It sublimes when heated to make a bright purple vapor. This vapor is very irritating, although colorful. Iodine does not dissolve in water, but it does dissolve in a solution of an iodide in water. It dissolves easily in organic solvents.

Iodine is at the bottom of the halogens and is the least reactive of the halogens. Iodine is an oxidizing agent, though not as strong as bromine or chlorine. It can become the colorless iodide ion if another atom or molecule gives an iodine atom one of its electrons. This is called reduction. Iodine reacts with hydrogen sulfide or hydrazine to make hydriodic acid. Iodine dissolves in oleum to make a bright blue solution of I2+ and sulfur dioxide. This cation is also made when iodine reacts with antimony pentafluoride.

Potassium iodide is one of the most common iodides. Iodides are normally colorless but turn yellow after being in air because the iodide is oxidized to iodine. Iodides react with acidified manganese dioxide or chlorine to make iodine. Iodine monochloride is a red or brown liquid. Iodine trichloride, as well as iodine trifluoride, are yellow solids. Iodates like potassium iodate are colorless solids similar to chlorates. Iodic acid is the only stable oxidizing halogen acid. Chloric acid, by comparison, is very unstable and dangerous. Iodine pentoxide is a white solid, and iodine pentafluoride is a yellowish liquid. Periodates, like sodium periodate, are colorless solids similar to perchlorates, although weaker oxidizing agents. They decompose to iodates when they are heated. Periodic acid is not as stable as iodic acid. Iodine heptafluoride is the only iodine(VII) compound.

It was discovered by Barnard Courtois in 1811. He burned seaweed to get sodium carbonate and reacted the residue with sulfuric acid. One time, he poured too much sulfuric acid on the seaweed and purple vapor came out which made dark blue-black crystals on a cold surface. He did not have enough money to see whether it was a new element or not. He gave samples to several chemists, who identified it as an element in 1813.

Iodine is too reactive to be in nature as an element. Iodine compounds are not common in the ground. There is a mineral called caliche that is found in dry deserts. It has iodate in it. Iodide is found in seawater. Kelp has quite large amounts of iodine in it. Iodine is one of the heaviest elements needed by living things. If we do not get enough of it, we get a disease known as goitre. Most salt has iodine in it, in the form of iodide or iodate. We can also take iodine pills to make sure we get enough.

Kelp was burned and the iodine extracted from the ashes in the 18th and 19th century, but now it is not good enough for common use. Most iodine now is extracted from seawater. Chlorine is reacted with seawater to change the iodide to iodine. Air is blown over the water to evaporate the iodine. Then the iodine is reduced with sulfur dioxide to hydriodic acid. Then the hydriodic acid is oxidized with chlorine again to make iodine. This process is repeated until the iodine is pure.

A very pure form of iodine is made by reacting copper sulfate and potassium iodide. This makes copper(II) iodide which is not stable. It breaks down into copper(I) iodide and iodine, which is pure.

Iodine can irritate skin. Its vapors are irritating to the lungs. It is less toxic than the other halogens, though. 2-3 grams of iodine can kill. Iodides are only toxic in large amounts.

All content from Kiddle encyclopedia articles (including the article images and facts) can be freely used under Attribution-ShareAlike license, unless stated otherwise. Cite this article:
Iodine Facts for Kids. Kiddle Encyclopedia.