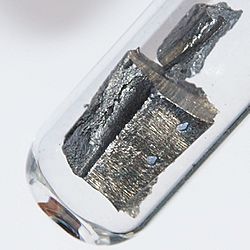 Some neodymium in a glass tube

Neodymium is a chemical element that has the symbol Nd on the periodic table. It has the atomic number 60 which means it has 60 protons in an atom. Neodymium can be combined with other elements like iron and boron to create the very strong neodymium magnet, these magnets can lift up to 1000 times their own weight. Neodymium is a metal that forms a coating of oxide around itself when it is placed in air. It is usually used as neodymium magnets for hard disk drives.

The neodymium magnets used to make hard disk drives do not weaken over time: they are permanent magnets. They can also be used in microphones or speakers. Electric guitars may use these magnets inside their pickups.

All content from Kiddle encyclopedia articles (including the article images and facts) can be freely used under Attribution-ShareAlike license, unless stated otherwise. Cite this article:
Neodymium Facts for Kids. Kiddle Encyclopedia.