A Neumann U87 capacitor microphone. 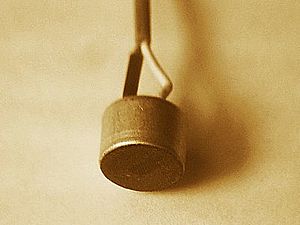 A microphone, sometimes referred to as a mike or mic (both IPA pronunciation:), converts sound into an electrical signal.

Microphones are used in many applications such as telephones, tape recorders, hearing aids, motion picture production, live and recorded audio engineering, in radio and television broadcasting and in computers for recording voice.

In order to speak to larger groups of people, a need arose to increase the volume of the human voice. The earliest devices used to achieve this were acoustic megaphones. Some of the first examples, from fifth century BC Greece, were theater masks with horn-shaped mouth openings that acoustically amplified the voice of actors in amphitheatres. In 1665, the English physicist Robert Hooke was the first to experiment with a medium other than air with the invention of the "lovers' telephone" made of stretched wire with a cup attached at each end.

German inventor Johann Philipp Reis designed an early sound transmitter that used a metallic strip attached to a vibrating membrane that would produce intermittent current. Better results were achieved with the "liquid transmitter" design in Scottish-American Alexander Graham Bell's telephone of 1876 – the diaphragm was attached to a conductive rod in an acid solution. These systems, however, gave a very poor sound quality.

The first microphone that enabled proper voice telephony was the (loose-contact) carbon microphone. This was independently developed by David Edward Hughes in England and Emile Berliner and Thomas Edison in the US. Although Edison was awarded the first patent (after a long legal dispute) in mid-1877, Hughes had demonstrated his working device in front of many witnesses some years earlier, and most historians credit him with its invention. The carbon microphone is the direct prototype of today's microphones and was critical in the development of telephony, broadcasting and the recording industries. Thomas Edison refined the carbon microphone into his carbon-button transmitter of 1886. This microphone was employed at the first ever radio broadcast, a performance at the New York Metropolitan Opera House in 1910. 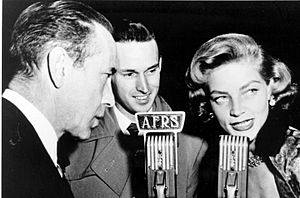 In 1916, E.C. Wente of Western Electric developed the next breakthrough with the first condenser microphone. In 1923, the first practical moving coil microphone was built. The Marconi-Sykes magnetophone, developed by Captain H. J. Round, became the standard for BBC studios in London. This was improved in 1930 by Alan Blumlein and Herbert Holman who released the HB1A and was the best standard of the day.

Also in 1923, the ribbon microphone was introduced, another electromagnetic type, believed to have been developed by Harry F. Olson, who essentially reverse-engineered a ribbon speaker. Over the years these microphones were developed by several companies, most notably RCA that made large advancements in pattern control, to give the microphone directionality. With television and film technology booming there was demand for high fidelity microphones and greater directionality. Electro-Voice responded with their Academy Award-winning shotgun microphone in 1963.

During the second half of 20th century development advanced quickly with the Shure Brothers bringing out the SM58 and SM57. The latest research developments include the use of fibre optics, lasers and interferometers.

Sound passes through the air in waves, and as was said above, the microphone turns the sound wave into an electrical wave. Different kinds of microphones will turn the sound waves into electricity in different ways.

A pop filter (or pop shield) is often used in recording studios. It is an electronic filter that reduces or eliminates 'popping' sounds caused by fast moving air (such as air from the mouth).

All content from Kiddle encyclopedia articles (including the article images and facts) can be freely used under Attribution-ShareAlike license, unless stated otherwise. Cite this article:
Microphone Facts for Kids. Kiddle Encyclopedia.