Tin can telephone facts for kids 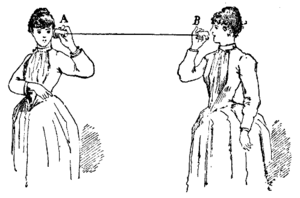 A 19th century tin can, or lovers' telephone

A tin can telephone is a type of acoustic (non-electrical) speech-transmitting device made up of two tin cans, paper cups or similarly shaped items attached to either end of a taut string or wire.

It is a particular case of mechanical telephony, where sound (i.e., vibrations in the air) is converted into vibrations along liquid or solid medium. These vibrations are transmitted along the medium and then reconverted back to sound. In the case of tin can telephone the medium is a string. 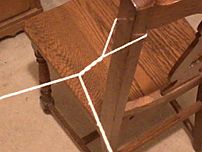 When the string is pulled taut and someone speaks into one of the cans, its bottom acts as a diaphragm, converting the sound waves into longitudinal mechanical vibrations which vary the tension of the string. These variations in tension set up longitudinal waves in the string which travel to the second can, causing its bottom to vibrate in a similar manner as the first can, thus recreating the sound, which is heard by the second person.

The signal can be directed around corners with at least two methods: The first method can be implemented by creating a loop in the string which is then twisted and anchored to another object. Another method makes use of an extra can positioned on the apex of the corner; the string is threaded through the base of the can so as to avoid coming into contact with the object around which the signal is to be directed.

All content from Kiddle encyclopedia articles (including the article images and facts) can be freely used under Attribution-ShareAlike license, unless stated otherwise. Cite this article:
Tin can telephone Facts for Kids. Kiddle Encyclopedia.