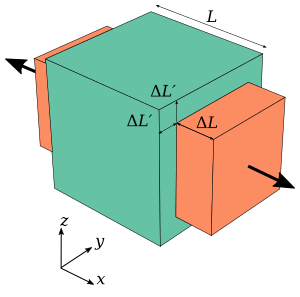 Figure 1: A cube with sides of length L of an isotropic linearly elastic material subject to tension along the x axis, with a Poisson's ratio of 0.5. The green cube is unstrained, the red is expanded in the x direction by

due to tension, and contracted in the y and z directions by

For example, if a block is being stretched as shown in the image to the right, the equation for the poisson's ratio will be:

All content from Kiddle encyclopedia articles (including the article images and facts) can be freely used under Attribution-ShareAlike license, unless stated otherwise. Cite this article:
Poisson's ratio Facts for Kids. Kiddle Encyclopedia.