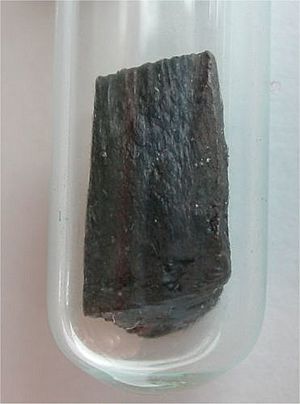 Barium is chemical element 56 on the periodic table. Its symbol is Ba. It contains 56 protons and 56 electrons. Its mass number is about 137.3. It is a metal.

Barium is part of a group of elements known as the alkaline earth metals. It is a silvery metal that easily turns black. It is soft and ductile. It can form alloys with some metals that are partially alloys and partially chemical compounds.

Barium is reactive, and if you put pure barium metal in the air, it will react with oxygen. At first it will turn black, then white as barium oxide is formed. Barium reacts with water to make barium hydroxide and hydrogen gas. Barium also reacts very fast with acids to make a barium salt and hydrogen. Barium can form barium peroxide if it is burned in air. 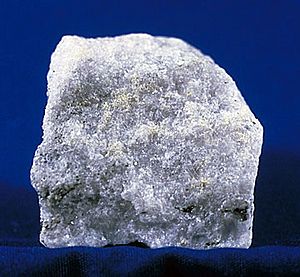 Barium is found as barium sulfate (barite) and barium carbonate (witherite) in the ground. Both of these minerals do not dissolve in water. Barium sulfate hardly dissolves in anything. Barium is found mainly in China, Germany, India, Morocco, and the US.

Barium carbonate, the other ore of barium, is dissolved in hydrochloric acid to make barium chloride and carbon dioxide. The barium chloride is melted and electrolyzed, making barium metal.

Barium is used to remove oxygen from cathode ray tubes and vacuum tubes. It is placed inside and reacts with all of the oxygen, using it up. Barium is also used in spark plug wire.

Certain compounds of barium, such as barium sulfate, are not toxic and can be put in the body. We can see where the barium travels in the body by X-rays and this can tell us whether there are problems, such as blockages. The barium sulfate builds up inside the body accumulating in organ systems. Barium sulfate absorbs the X-Rays as they pass through the body and an image is formed from the points where the rays have not passed through. It is useful because it provides a reasonably detailed image from very limited radiation exposure, compared with a CT scan for instance. Barium sulfate can be used as a pigment, too.

Other barium compounds have several other uses.

Barium is a very toxic element, though, and is dangerous. There is a really small amount of barium in our food, and this does not cause problems. If we get barium from other places, though, it can cause many problems. Even 1 gram of barium can kill you. It is dangerous because it acts like other really important elements, such as calcium and magnesium. If barium replaces these elements, it messes up the body.

All content from Kiddle encyclopedia articles (including the article images and facts) can be freely used under Attribution-ShareAlike license, unless stated otherwise. Cite this article:
Barium Facts for Kids. Kiddle Encyclopedia.