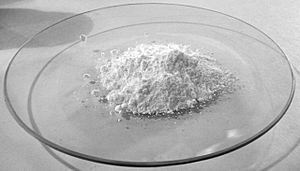 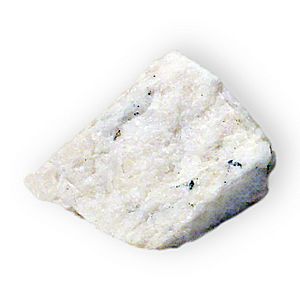 Barium carbonate is a chemical compound. Its chemical formula is BaCO3. It contains barium and carbonate ions.

Barium carbonate occurs as witherite. Witherite is the main source of barium salts. It is more easily turned into other barium compounds than barium sulfate, barite. It is heavily mined in Northumberland. It turns into barium sulfate when water containing sulfates flows through it.

Barium carbonate can dissolve in stomach acid, so it is toxic. There is a controversy over whether it should be used as a glaze.

All content from Kiddle encyclopedia articles (including the article images and facts) can be freely used under Attribution-ShareAlike license, unless stated otherwise. Cite this article:
Barium carbonate Facts for Kids. Kiddle Encyclopedia.