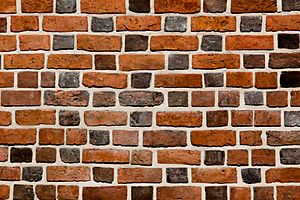 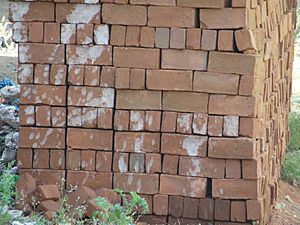 A pallet of bricks stacked without mortar 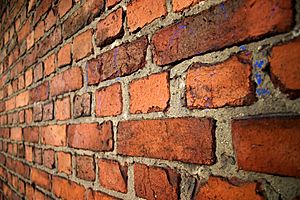 A brick is a man-made building material used to make walls and make places to walk. It is a single unit of a kneaded clay-bearing soil, sand and lime, or concrete material, fire-hardened or air-dried, used in masonry construction.

Bricks are made mostly of clay. They are put into molds or cut with wires, and then baked in an oven. The color of a brick depends on the clay from which it was made.

Masons build brick walls. They join bricks together using mortar. Bricks can be assembled into many different patterns. The most common pattern is called "running bond". A row of bricks is called a course. A wall that is just one brick thick has one wythe.

Bricks used outdoors on the ground are called "pavers". Engineering bricks are used for high load-bearing walls, and for damp-proof courses. They are more expensive, and are made of better clays and fired at a higher temperature.

The oldest shaped bricks found date back to 7500 B.C. They have been found in Çayönü, a place located in the upper Tigris area in south east Anatolia close to Diyarbakir. A bit later, between 7000 and 6395 BC, bricks come from Jericho and Catal Hüyük.

Fired bricks are one of the longest-lasting and strongest building materials. They have been used since about 3000 BC in early Indus Valley cities. Sun-dried mud bricks are much older, and quite satisfactory in hot, dry climates. Fired bricks are much more resistant to cold and moist weather conditions. They allow permanent building in regions where the harsher climate prevents the use of mud bricks.

All content from Kiddle encyclopedia articles (including the article images and facts) can be freely used under Attribution-ShareAlike license, unless stated otherwise. Cite this article:
Brick Facts for Kids. Kiddle Encyclopedia.