Kids Encyclopedia Facts
For other places with this name, see Northumberland (disambiguation).

Northumberland (RP pronunciation) (abbreviated Northd) is a county in North East England. The northernmost county of England, it borders Cumbria to the west, County Durham and Tyne and Wear to the south and Scotland to the north. To the east is the North Sea coastline with a 64-mile (103 km) long distance path. The county town is Alnwick although the county council is in Morpeth (for the moment, as there are plans to move it to nearby Ashington). The northernmost point of Northumberland and England is at Marshall Meadows Bay.

The county of Northumberland included Newcastle upon Tyne until 1400, when the city became a county of itself. Northumberland expanded greatly in the Tudor period, annexing Berwick-upon-Tweed in 1482, Tynedale in 1495, Tynemouth in 1536, Redesdale around 1542 and Hexhamshire in 1572. Islandshire, Bedlingtonshire and Norhamshire were incorporated into Northumberland in 1844. Tynemouth and other settlements in North Tyneside were transferred to Tyne and Wear in 1974 under the Local Government Act 1972.

Lying on the Anglo-Scottish border, Northumberland has been the site of a number of battles. The county is noted for its undeveloped landscape of high moorland, now largely protected as the Northumberland National Park. Northumberland is the most sparsely populated county in England, with only 62 people per square kilometre. 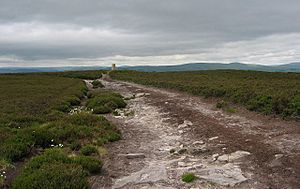 Northumberland originally meant 'the land of the people living north of the River Humber'. The present county is the core of that former land, and has long been a frontier zone between England and Scotland. During Roman occupation of Britain, most of the present county lay north of Hadrian's Wall, and was only controlled by Rome for the brief period of its extension north the Antonine Wall. The Roman road Dere Street crosses the county from Corbridge over high moorland west of the Cheviot Hills into present Scotland to Trimontium (Melrose). As evidence of its border position through medieval times, Northumberland has more castles than any other county in England, including those of Alnwick, Bamburgh, Dunstanburgh, Newcastle and Warkworth.

Northumberland has a rich prehistory with many instances of rock art, hillforts such as Yeavering Bell and stone circles like the Goatstones and Duddo Five Stones. Most of the area was occupied by the Brythonic-Celtic Votadini people, with another large tribe, the Brigantes to the south.

Later, the region of present-day Northumberland formed the core of the Anglian kingdom of Bernicia (from ca. 547), which united with Deira (south of the River Tees) to form the kingdom of Northumbria in the 7th century. The historical boundaries of Northumbria under King Edwin (reigned 616–633) stretched from the Humber in the south to the Forth in the north, although in 1018 its northern part, between the Tweed and the Forth (including Lothian, the region which contains Edinburgh), was ceded to the Kingdom of Scotland.

Northumberland is often called the "cradle of Christianity" in England, because Christianity flourished on Lindisfarne—a tidal island north of Bamburgh, also called Holy Island—after King Oswald of Northumbria (reigned 634–642) invited monks from Iona to come to convert the English. Lindisfarne saw the production of the Lindisfarne Gospels (ca. 700) and it became the home of St Cuthbert (ca. 634–687, abbot from ca. 665), who is buried in Durham Cathedral.

Bamburgh is the historic capital of Northumberland, the "royal" castle from before the unification of the Kingdoms of England under the monarchs of the House of Wessex in the 10th century.

The Earldom of Northumberland was briefly held by the Scottish royal family by marriage between 1139–1157 and 1215–1217. Scotland relinquished all claims to the region as part of the Treaty of York (1237). The Earls of Northumberland once wielded significant power in English affairs because, as powerful and militaristic Marcher Lords, they had the task of protecting England from Scottish invasion.

Northumberland has a history of revolt and rebellion against the government, as seen in the Rising of the North (1569–1570) against Elizabeth I of England. These revolts were usually led by the Earls of Northumberland, the Percy family. Shakespeare makes one of the Percys, the dashing Harry Hotspur (1364–1403), the hero of his Henry IV, Part 1. The Percys were often aided in conflict by other powerful Northern families such as the Nevilles and the Patchetts; the latter were stripped of all power and titles after the English Civil War of 1642–1651.

After the Restoration of 1660, the county was a centre for Roman Catholicism in England, as well as a focus of Jacobite support. Northumberland was long a wild county, where outlaws and Border Reivers hid from the law. However, the frequent cross-border skirmishes and accompanying local lawlessness largely subsided after the Union of the Crowns of Scotland and England under King James I and VI in 1603.

Northumberland played a key role in the Industrial Revolution from the 18th century on. Many coal mines operated in Northumberland until the widespread closures in the 1970s and 1980s. Collieries operated at Ashington, Bedlington, Blyth, Choppington, Netherton, Ellington and Pegswood. The region's coalfields fuelled industrial expansion in other areas of Britain, and the need to transport the coal from the collieries to the Tyne led to the development of the first railways. Shipbuilding and armaments manufacture were other important industries before the deindustrialisation of the 1980s.

As of 2015[update] Northumberland remains largely rural, and is the least-densely populated county in England. In recent years the county has had considerable growth in tourism due to its scenic beauty and the abundant evidence of its historical significance. 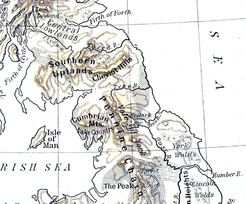 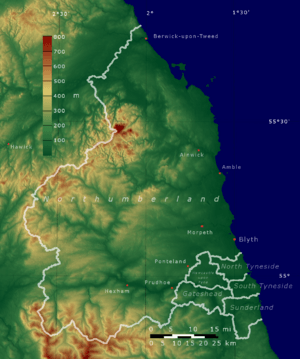 Northumberland has a diverse physical geography. It is low and flat near the North Sea coast and increasingly mountainous toward the northwest. The Cheviot Hills, in the northwest of the county, consist mainly of resistant Devonian granite and andesite lava. A second area of igneous rock underlies the Whin Sill (on which Hadrian's Wall runs), an intrusion of Carboniferous dolerite. Both ridges support a rather bare moorland landscape. Either side of the Whin Sill the county lies on Carboniferous Limestone, giving some areas of karst landscape. Lying off the coast of Northumberland are the Farne Islands, another dolerite outcrop, famous for their bird life.

There are coal fields in the southeast corner of the county, extending along the coastal region north of the river Tyne. The term 'sea coal' likely originated from chunks of coal, found washed up on beaches, that wave action had broken from coastal outcroppings. 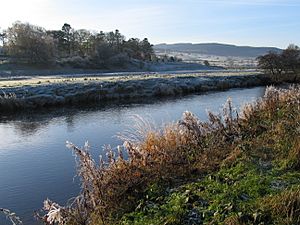 Being in the far north of England, above 55° latitude, and having many areas of high land, Northumberland is one of the coldest areas of the country. It has an average annual temperature of 7.1 to 9.3 °C, with the coldest temperatures inland. However, the county lies on the east coast, and has relatively low rainfall, between 466 and 1060 mm annually, with the highest amounts falling on the high land in the west. Between 1971 and 2000 the county averaged 1321 to 1390 hours of sunshine per year.

Approximately a quarter of the county is protected as the Northumberland National Park, an area of outstanding landscape that has largely been protected from development and agriculture. The park stretches south from the Scottish border and includes Hadrian's Wall. Most of the park is over 240 metres (800 feet) above sea level. The Northumberland Coast is also a designated Area of Outstanding Natural Beauty.

There is a variety of notable habitats and species in Northumberland including: Chillingham Cattle herd; Holy Island; Farne Islands; and Staple Island. Moreover, 50% of England's red squirrel population lives in the Kielder Water and Forest Park along with a large variety of other species including roe deer and wildfowl.

Northumberland has traditions not found elsewhere in England. These include the rapper sword dance, the Clog dance and the Northumbrian smallpipe, a sweet chamber instrument, quite unlike the Scottish bagpipe. Northumberland also has its own tartan or check, sometimes referred to in Scotland as the Shepherd's Tartan. Traditional Northumberland music has more similarity to Lowland Scottish and Irish music than it does to that of other parts of England, reflecting the strong historical links between Northumbria and the Lowlands of Scotland, and the large Irish population on Tyneside.

The Border ballads of the region have been famous since late mediaeval times. Thomas Percy, whose celebrated Reliques of Ancient English Poetry appeared in 1765, states that most of the minstrels who sang the Border ballads in London and elsewhere in the 15th and 16th centuries belonged to the North. The activities of Sir Walter Scott and others in the 19th century gave the ballads an even wider popularity. William Morris considered them to be the greatest poems in the language, while Algernon Charles Swinburne knew virtually all of them by heart.

One of the best-known is the stirring Chevy Chase, which tells of the Earl of Northumberland's vow to hunt for three days across the Border 'maugre the doughty Douglas'. Of it, the Elizabethan courtier, soldier and poet Sir Philip Sidney famously said: 'I never heard the old song of Percy and Douglas that I found not my heart moved more than with a trumpet'. Ben Jonson said that he would give all his works to have written Chevy Chase.

Overall the culture of Northumberland, as with the north east of England in general, has much more in common with Scottish Lowland and Northern English culture than with that of Southern England. One reason is that both regions have their cultural origins in the old Anglian Kingdom of Northumbria, a fact borne out by the linguistic links between the two regions. These include many Old English words not found in other forms of Modern English, such as bairn for child (see Scots language and Northumbria). The other reason for the close cultural links is the clear pattern of net southward migration. There are more Scots in England than English people north of the border. Much of this movement is cross-county rather than distant migration, and the incomers thus bring aspects of their culture as well as reinforce shared cultural traits from both sides of the Anglo-Scottish border.

Whatever the case, the lands just north or south of the border have long shared certain aspects of history and heritage; it is thus thought by some that the Anglo-Scottish border is largely political rather than cultural.

Attempts to raise the level of awareness of Northumberland culture have also started, with the formation of a Northumbrian Language Society to preserve the unique dialects (Pitmatic and other Northumbrian dialects) of this region, as well as to promote home-grown talent.

Northumberland's county flower is the Bloody Cranesbill (Geranium sanguineum) and her affiliated Royal Navy ship is her namesake, HMS Northumberland.

Northumberland has its own flag, which is a banner of the arms of Northumberland County Council. The shield of arms is in turn based on the arms medieval heralds had attributed to the Kingdom of Bernicia (which the first County Council used until was granted its own arms). The Bernician arms were fictional but inspired by Bede's brief description of a flag used on the tomb of St Oswald in the 7th century.

The current arms were granted to the county council in 1951, and adopted as the flag of Northumberland in 1995. 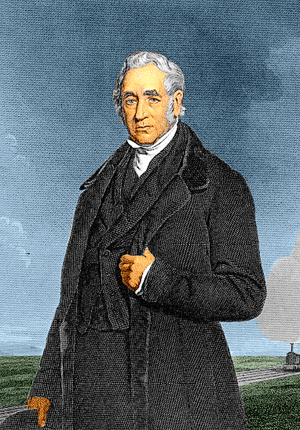 George Stephenson was born in Northumberland

Ashington was the birthplace of the three famous footballers Bobby and Jack Charlton in 1937 and 1935 respectively; and Jackie Milburn previously in 1924. In 1978 Steve Harmison, an international cricketer was born here.

Mickley was the birthplace of Thomas Bewick, an artist, wood engraver and naturalist in 1753 and Bob Stokoe, a footballer and F.A. Cup winning manager (with Sunderland in 1973) born 1930.

Other notable births include: 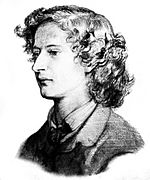 Algernon Charles Swinburne, the poet, was raised in Northumberland

NOTE: New parishes have been added since 2001. These are missing from the list.

Although not on this list, the population of Cramlington is estimated at 39,000.

Some settlements which were historically part of the county now fall under the county of Tyne and Wear:

Most common surnames in Northumberland at the time of the United Kingdom Census of 1881, by order of incidence:

All content from Kiddle encyclopedia articles (including the article images and facts) can be freely used under Attribution-ShareAlike license, unless stated otherwise. Cite this article:
Northumberland Facts for Kids. Kiddle Encyclopedia.