Josephine Elizabeth Butler (née Grey; 13 April 1828 – 30 December 1906) was an English feminist and social reformer in the Victorian era. She campaigned for women's suffrage, the right of women to better education, the end of coverture in British law, the abolition of child abuse, and an end to human trafficking of young women and children.

Grey grew up in a well-to-do and politically connected progressive family which helped develop in her a strong social conscience and firmly held religious ideals. She married George Butler, an Anglican divine and schoolmaster, and the couple had four children, the last of whom, Eva, died falling from a banister. The death was a turning point for Butler, and she focused her feelings on helping others, starting with the inhabitants of a local workhouse.

She began to campaign for women's rights in British law. In 1869 she became involved in the campaign to repeal the Contagious Diseases Acts. The campaign achieved its final success in 1886 with the repeal of the Acts. Butler also formed the International Abolitionist Federation, a Europe-wide organisation to combat similar systems on the continent. 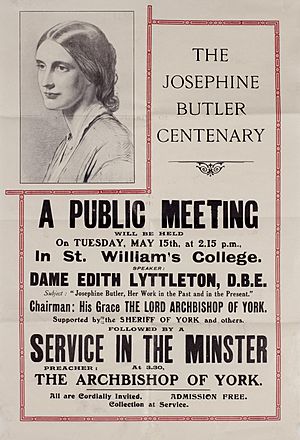 Butler wrote more than 90 books and pamphlets over the course of her career, most of which were in support of her campaigning. Butler's Christian feminism is celebrated by the Church of England with a Lesser Festival, and by representations of her in the stained glass windows of Liverpool's Anglican Cathedral and St Olave's Church in the City of London.

Her name appears on the Reformers Memorial in Kensal Green Cemetery, London, and Durham University named one of their colleges after her. Her campaign strategies changed the way feminist conducted future struggles. After her death in 1906 the feminist intellectual Millicent Fawcett hailed her as "the most distinguished Englishwoman of the nineteenth century". 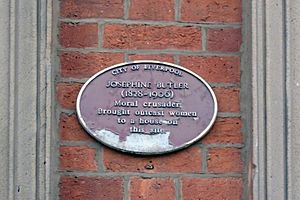 From 1901 Butler began to withdraw from public life, resigning her positions in the campaign organisations and spending more time with her family. In 1903 she moved to Wooler in Northumberland, to live near her eldest son. On 30 December 1906 she died at home and was buried in the nearby village of Kirknewton.

In 1907 Josephine Butler's name was added to the south side of the Reformers' Memorial in Kensal Green Cemetery, London. The memorial was erected for those "who had defied custom and interest for the sake of conscience and public good". She is celebrated in the Church of England with a Lesser Festival on 30 May, and represented in a stained glass window in Liverpool's Anglican Cathedral, All Saints' Church, Cambridge and St Olave's Church in the City of London.

All content from Kiddle encyclopedia articles (including the article images and facts) can be freely used under Attribution-ShareAlike license, unless stated otherwise. Cite this article:
Josephine Butler Facts for Kids. Kiddle Encyclopedia.