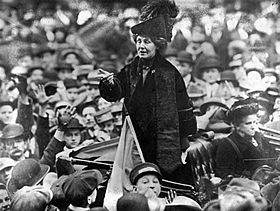 After selling her home, Emmeline Pankhurst, pictured in New York City in 1913, travelled constantly, giving speeches throughout Britain and the United States

Feminism is a social and political movement. Feminism is about changing the way that people see male and female rights, and campaigning for equal ones. Somebody who follows feminism is called a feminist.

There are many different types of feminism:

There are also many other types of feminism. 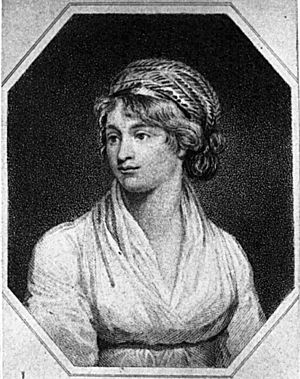 There have been women who have been involved in politics throughout history.

Starting in 1960, there have been many women elected to high positions of power, such as prime minister. Sirimavo Bandaranaike was the first, followed by Indira Gandhi, Golda Meir, Elisabeth Domitien and Margaret Thatcher. Dame Eugenia Charles lasted nearly 15 years in the post, a record.

Feminism started with the idea that human rights should be given to women. This idea was put forward by some philosophers in the 18th and 19th centuries such as Mary Wollstonecraft and John Stuart Mill. Later feminists in the early 20th century also said that women should be allowed to vote in a democracy. Many women felt very strongly that they should be allowed to vote and there were many protests. These women were called Suffragettes. This is because they were fighting for Universal suffrage which means everybody is able to vote. The Suffragettes staged many protests for their rights. After women received the vote, feminism worked to make all of society more equal for women.

Not all female politicians have been welcomed by feminists, with Margaret Thatcher, Sarah Palin and Michele Bachmann being clear examples.

There are reasons why some people do not like feminism:

All content from Kiddle encyclopedia articles (including the article images and facts) can be freely used under Attribution-ShareAlike license, unless stated otherwise. Cite this article:
Feminism Facts for Kids. Kiddle Encyclopedia.