Khōst is the capital city of Khost Province, Afghanistan. It is the largest city in the southeastern part of the country, and also the largest in the region of Loya Paktia. To the south and east of Khost lie Waziristan and Kurram in Pakistan. Khost is the home of Shaikh Zayed University. Khost Airport serves the city as well as the larger region surrounding the city. 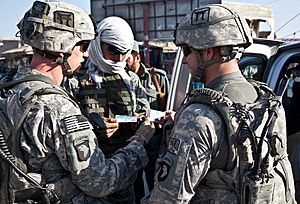 During the Soviet–Afghan War, Khost was the object of a siege which lasted for more than eight years. Soon after the invasion of Afghanistan by Soviet troops, Afghan guerillas took control of the only land route between Khost and Gardez, effectively putting a stop to the Soviet advance. During the assault on the Zhawar Kili Cave complex, the Soviets used the Khost Airfield as an initial staging ground to insert troops into the combat zone, using Mil Mi-8 armed helicopter transport ships.

Khost has been in American control since the 2001 US led invasion of Afghanistan. Due to its location in eastern Afghanistan, it was a hotbed for insurgent activity attempting to dislodge the American forces there. 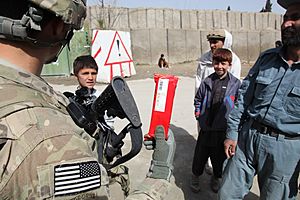 Throughout 2007 and 2008 roads had been improved, businesses were springing up and schools were being built. A new airport was under construction as the Khost Airfield was used by the US Military, creating new opportunities and jobs. The Provincial Reconstruction Team was instrumental in connecting the people to the government in Khost City and ensured this happened by being able to access over $2.5 million under the Commanders Emergency Response Program (CERP) program.

All content from Kiddle encyclopedia articles (including the article images and facts) can be freely used under Attribution-ShareAlike license, unless stated otherwise. Cite this article:
Khost Facts for Kids. Kiddle Encyclopedia.