Geography of Afghanistan facts for kids

Afghanistan is in the middle of Asia. The country is landlocked and mountainous, and has most of the Hindu Kush mountains. There are four major rivers in the country: the Amu Darya, the Hari River, the Kabul River and the Helmand River. The country also contains a number of smaller rivers, lakes, and streams.

Afghanistan has 5529 km of borders. They are with neighbouring countries:

The borders are called "porous". That means that in many places people can cross over with not much official control.

Afghanistan has a lot of rugged mountains known as the Hindu Kush as well areas of desert.

Damaging earthquakes occur in the Hindsh mountains; flooding and droughts in the south and south-west of the country. 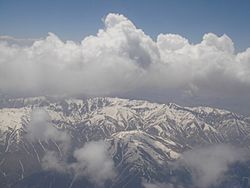 The Hindu Kush reaches a height of 7485 m. / 24,557 ft. at Nowshak, Afghanistan's highest peak. Of the ranges extending southwestward from the Hindu Kush, the Koh-i-Baba reaches the greatest height (Shah Fuladi, 5,142 m /16,870 ft). The Safed Koh range, which includes the Tora Bora area, dominates the border area southeast of Kabul.

The area towards the Khyber Pass across the Safed Koh are in eastern Afghanistan; at the top the height is 1070 m. / 3,509 ft. at Landi Kotal. This area is near to Pakistan, the town of Torkham is five kilometres from Pakistan.

All content from Kiddle encyclopedia articles (including the article images and facts) can be freely used under Attribution-ShareAlike license, unless stated otherwise. Cite this article:
Geography of Afghanistan Facts for Kids. Kiddle Encyclopedia.