Helmand (Pashto/Dari: هلمند) is one of the 34 provinces of Afghanistan. It is in the southwest of the country. Its capital is Lashkar Gah. The Helmand River flows through the mainly desert region, providing water for irrigation.

Helmand is the world's largest opium-producing region. It makes 75% of the world's total production. This is more than all of Burma, which is the second largest producing nation after Afghanistan. Afghan opium accounts for more than 90% of the global supply.

The current governor is Mohammad Golab Mangal (since March 2008).

Much of the fighting between NATO and Taliban forces is taking place in this province. Helmand is said to be a Taliban stronghold.

Helmand has a southern border with the Balochistan province of Pakistan. Many domestic and international observers have criticized Pakistan's efforts towards securing the border against Taliban insurgents. 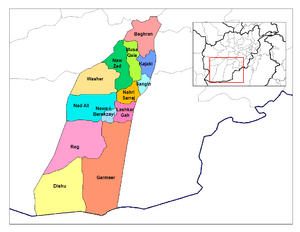 The population is 1,441,769. The area is 58,584 square kilometres. Pashtuns are the majority estimated at 92% of the population. There are also Balochs who are in the south. Also there are small numbers of Hazara, Brahui and Tajik.

All content from Kiddle encyclopedia articles (including the article images and facts) can be freely used under Attribution-ShareAlike license, unless stated otherwise. Cite this article:
Helmand Province Facts for Kids. Kiddle Encyclopedia.