Kandahar or Qandahar (Pashto: کندھار or قندهار) (Persian: قندهار) is one of the largest of the thirty-four provinces of Afghanistan. It is located in southern Afghanistan, between Helmand, Oruzgan and Zabul provinces. Its capital is the city of Kandahar. There are about 913,000 people who live in the province. The United States is currently fighting the Taliban in this area.

The following is a list of the districts of Kandahar Province: 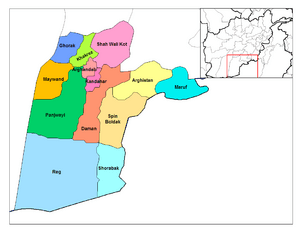 All content from Kiddle encyclopedia articles (including the article images and facts) can be freely used under Attribution-ShareAlike license, unless stated otherwise. Cite this article:
Kandahar Province Facts for Kids. Kiddle Encyclopedia.