Zabul (Pashto: زابل) is a historic province in southern Afghanistan. Qalat is the capital. About 275,100 people live in the province. The major ethnic group is Pashtun. 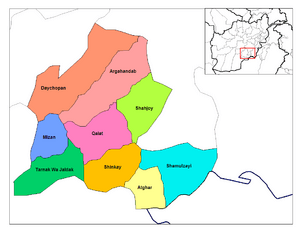 Map of the districts of Zabol province of Afghanistan.

Zabul is surrounded by Paktika and Ghzani provinces in the east, Urozgan province in the north, Kandahar province in west and south west, and Balochistan state of Pakistan in south.

Around 800,000 people live in Zabul with majority of them in Shahjoi, Arghandab and Kalat city.

Almond, grapes, apricots, wheat, and vigitables are the main agricultural products of Zabul, where around 80% people are farmers.

the current governor of Zabul province is Mr. Bissmillah Afghanmal son of Haji Mauladad Momand, borne in Kandahar in 1976.

In 2006, the province's first airstrip was opened near Qalat. It was for the Afghan National Army. The airstrip is not paved.

All content from Kiddle encyclopedia articles (including the article images and facts) can be freely used under Attribution-ShareAlike license, unless stated otherwise. Cite this article:
Zabul Province Facts for Kids. Kiddle Encyclopedia.