Ghazni (Persian: غزنی) (Pashto: غزني) is one of the thirty-four provinces of Afghanistan. It is in the east of the country. Its capital is Ghazni City.

The major ethnic groups in the province are Hazaras, Pashtuns and Tajiks. There are also some Burki, and Uzbeks. Ghazni is made up of 19 districts. 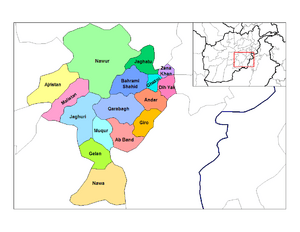 Districts of Ghazni. Note: this is the old district map.

Some Sikhs and Hindus also live in Ghazni province. During the Taliban regime they fled the country. With the current administration they have returned to Ghazni city.

Band E Sardeh Dam is located in Andar District near the border with Paktika Province. It creates a large water reservoir that is important to the irrigation of the Kahnjoor farming zone.

All content from Kiddle encyclopedia articles (including the article images and facts) can be freely used under Attribution-ShareAlike license, unless stated otherwise. Cite this article:
Ghazni Province Facts for Kids. Kiddle Encyclopedia.