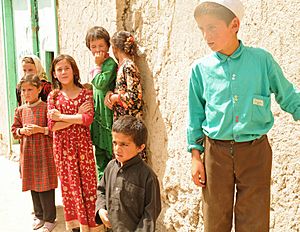 Tajiks (Persian: تاجيک Tājīk) are a Persian-speaking people who are mostly found in what is now Tajikistan, including in parts of Afghanistan and Uzbekistan. After the Soviet invasion of Afghanistan in 1979, some Tajik refugees escaped to live in neighboring Iran and Pakistan. Most Tajiks are Sunni Muslims, but a few in remote mountain areas follow Shia Islam.

The Tajiks are some what similar to Iranians in appearance and culture, they make up almost 80% of Tajikistan's total population. In the early 21st century there were about 6 million Tajiks in Tajikistan and more than 1 million in Uzbekistan. There were about 5 million in Afghanistan. Another 40,000 lived in the Uygur Autonomous Region of Xinjiang in China.

The name Tajik being used for this group of people began in the early 20th century by the Russians. Before that, they were called Sarts. The name Tajik refers to the traditionally sedentary people who speak a form of Persian language called Tajiki in Tajikistan and Uzbekistan, and who speak today's Dari language in Afghanistan.

It is generally accepted that the origin of the word Tajik is Middle Persian Tāzīk "Arab" (New Persian: Tazi), or an Iranian (Sogdian or Parthian) cognate word. Some Turks of Central Asia adopted a variant of this word, Täžik, to designate the Persian Muslims in the Oxus basin and Khorasan, who were the Turks' rivals.

Historians believe that some Tajiks may be connected to ancient Aryans who lived in the region for thousands of years. They were the heirs and transmitters of the Central Asian sedentary culture that diffused in prehistoric times from the Iranian plateau into an area extending roughly from the Caspian Sea to the borders of China. The Aryans constituted the core of the ancient population of Khwarezm, Sogdiana and Bactria, which formed part of Transoxania. They were included in the empires of Persia and Alexander the Great, and they mixed with later invaders like the Mauryans, Kushans and Hepthalites. Over the course of time, the language that was used by these ancient people eventually gave way to Farsi, a western dialect spoken in Iran, Afghanistan and Tajikistan. In the 13th century, Genghis Khan and his Mongol army settled in many of the popular Persian cities after whiping out the Persian population. These Mongols later adopted the Persian language and the religion of Islam. Tajiks usually reject Mongol origin and claim to be ancient Persians but this is difficult to prove.

All content from Kiddle encyclopedia articles (including the article images and facts) can be freely used under Attribution-ShareAlike license, unless stated otherwise. Cite this article:
Tajik people Facts for Kids. Kiddle Encyclopedia.