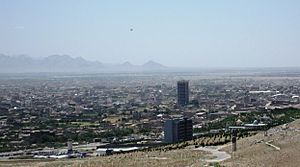 Herat (Persian: هرات, Herāt) is the third largest city of Afghanistan with about 436,300 people living in it as of 2012.436,300 as of 2012. It is the capital of a Herat province. It is in the west of the country, close to the border of Iran. The spoken language in the city is called Herati Persian or just Herati.

Herat dates back to very old times. Avesta, the old book of Zoroastrianism mentions Herat as "Haroyu" and lists it as the sixth land of the sixteen perfect lands created by Ahura Mazda, the Zoroastrian god. In Achaemenid times (ca. 550-330 BC), the surrounding district was known as "Haraiva" (in Old Persian). Ancient Greeks called it "Aria" and "Artacoana" was the capital of Aria. Alexander the Great took Artacoana in 330 BC and destroyed it. He later built another city near Artacoana and named it "Alexandria in Ariana", today's city of Herat. After him Parthians and Sassanians took over. Sassanians called the city “Harēv”.

Arabs took Herat in 660 AD, and it became a center of the Muslim world. Herat has a long history as a centre for sufism, the mystical branch of Islam. It became part of the area then known as Khurasan, which reached its peak of civilization in the twelfth century. In 1221 AD, it was taken by the Mongols and later destroyed by Genghis Khan and Timur, the Turkic conqueror, took it in about 1393 AD. Herat’s greatest era was during the Timurid rule, when it was a centre of science and culture. As the capital of the Timurid empire, it boasted many fine religious buildings and was famous for its sumptuous court life and musical performance and its tradition of miniature paintings. Later Persians and Afghans fought over the control of the city and Herat changed hands several times before it (under British interference) permanently became part of Afghanistan in 1857 under the Treaty of Paris.

In March 1979, an anti-Communist uprising in Herat, left 25,000 civilian deaths. Between 1978 and 1992, communist forces in Herat city fought resistance forces holding the countryside. In 1995 the area came under the control of Pashtuns of the Taliban movement. After the United States' invasion of Afghanistan, on November 12, 2001, it was liberated from the Taliban by the Northern Alliance. These days, unlike other places in Afghanistan, Herat is safer.

All content from Kiddle encyclopedia articles (including the article images and facts) can be freely used under Attribution-ShareAlike license, unless stated otherwise. Cite this article:
Herat Facts for Kids. Kiddle Encyclopedia.