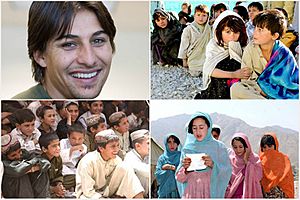 Pashtuns, sometimes spelled Pushtuns, or Pakhtuns, or Pukhtuns, (Urdu: Pathan, Persian: Afghan), are the largest ethnic group in Afghanistan and the second largest in Pakistan. Their mother language is Pashto, but many of them also speak neighboring Urdu, Hindko and Dari languages. They are the original or native people of the area south of the Hindu Kush in Afghanistan and west of the Indus River in Pakistan. However, in the modern period, they have spread to cities outside their native land. According to researchers, the total population of the group is estimated to be around 50 million.

Many Pashtuns believe that their ancestors were ancient Hebrews who arrived to what is now Afghanistan over 2,000 years ago and settled there. They were first mentioned by a Greek historian in 500 BC, then by Alexander the Great, and in the 3rd century they are called "Abgans" ("Afghans") by the Persian rulers. In the army of the Ghaznavids and Ghurids, thousands of Afghans were reported to be serving. They ruled Delhi Sultanate in the past and also Persia between 1725 to 1729 until they established the last Afghan empire that became what is now Afghanistan.

The Pashtun people follow a strict code of honor, known as Pakhtunwali, that requires them to support the poor, the weak, and the challenged; to fight evil; to provide shelter to anyone who needs it and many more. Pashtun are also strict with obedience in their families and society. They are also known as the best at welcoming guests and taking good care of them. They really love to see respectful people around the society, with great manners and obedience.

The Pashtuns are mostly farmers, herdsmen, and warriors but many of them are also businessmen and politicians. Most tribesmen are sedentary farmers, combining cultivation with animal husbandry; some are migratory herdsmen and caravaners. Large numbers of them have always been attracted to military service.

In Afghanistan, Pashtun make up around 50% of the total population. They form about 60 tribes of different size and importance, each of which occupies a different territory. In Afghanistan, where Pashtun are the major ethnic group, the main tribes are the Durrani, who mostly live in the south and west, and the Ghilzai, who live in northern and eastern parts of the country.

They are over 15% of Pakistan's population, with Peshawar and Quetta being their principal cities. They predominate north of Quetta between the Sulaiman Range and the Indus River. Significant number of Pashtuns also live in most other major Pakistani cities, particularly Karachi, Islamabad, Rawalpindi, and Lahore. In the hill areas the main tribes are, from south to north: the Tarin, Kakaṛ, Sherani, and Ustarana south of the Gumal River; the Maḥsud, Darwesh Khel, Waziri, and Biṭani between the Gumal River and Thal; the Turi, Bangash, Orakzay, Afridi, and Shinwari from Thal to the Khyber Pass; and the Mahmand, Utman Khel, Tarklani, and Yusufzay to the north and northeast of the Khyber.

All content from Kiddle encyclopedia articles (including the article images and facts) can be freely used under Attribution-ShareAlike license, unless stated otherwise. Cite this article:
Pashtun people Facts for Kids. Kiddle Encyclopedia.