Tomb of Quaid-e-Azam Muhammad Ali Jinnah, the founder of Pakistan 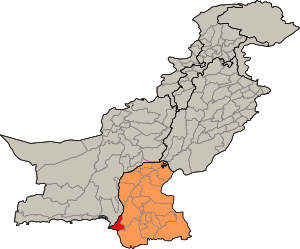 City of Karachi located in Sindh

Coats of arms of the City District Government Karachi.

Karachi (Urdu: کراچی) is the largest city and former capital of Pakistan and the capital of the province of Sindh. It's old name found in history books is "Mai Kolachi Jo Goth" and "Karatishi" is also one of the old version of its name. A native of Karachi is called a Karachiite. The city is the financial and commercial centre of Pakistan. It has two important regional seaports. The city lies on the coast of the Arabian Sea west of the Indus River delta. Karachi generates the largest share of Pakistan's GDP and national revenue. The population is estimated at approximately 12 million, making it the third largest cities in the world after Shanghai and Mumbai.It has five districts: District South, District East, District West, District Central, and Distrct Malir. Karachi has the most number of districts in Sindh after Hyderabad, which has six districts. Quad-e-Azam (Muhammad Ali Jinnah) father of the nation was born and buried in Karachi.

Apart from the University of Karachi, there are several other institutions of higher education and numerous colleges and schools in Karachi. Karachi is home to the National Stadium which hosts many cricket games, and several other sports complexes. The city has several long sandy beaches including Clifton/Kemari beach and Sandspit beach. Clifton beach suffered from a recent oil spillage but the beach has been cleaned.Karachi has Pakistan's first nuclear site KANUP in 1952 from Canada. The city has 26 universities, including 1. Karachi university-KU 2. Nadirshaw Eduljee Deenshaw engineering university-NED University Hamdard Medical University & 4. Dow University of Health Sciences. Karachi has the honor to host the first ever night hockey match between India and Pakistan in 1986 at Hockey Club of Pakistan Stadium but failed to gain the official status due to having no night hockey match recognition by World Hockey federation at that time.

Karachi has many large and small shopping areas including the Saddar area in downtown Karachi. Karachi also has a number of large modern shopping malls. The city has a modern international airport called the Jinnah International Airport and two large shipping ports at Port of Karachi and Port Qasim. Karachi is linked by railway to the rest of Pakistan.

Karachi has a hot desert climate (BWh in the Koeppen climate classification).

All content from Kiddle encyclopedia articles (including the article images and facts) can be freely used under Attribution-ShareAlike license, unless stated otherwise. Cite this article:
Karachi Facts for Kids. Kiddle Encyclopedia.