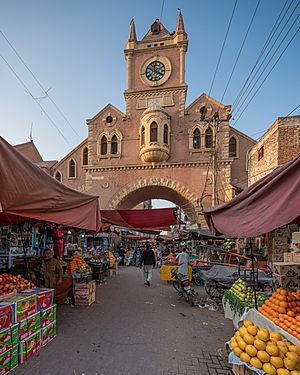 Hyderabad (Sindhi and Urdu: حيدرآباد Ḥaidarābād) is in the Sindh province of Pakistan. The city was founded in 1768 by Mian Ghulam Shah Kalhoro on the ruins of a Mauryan fishing village along the bank of the Indus River known as Neroon Kot (Sindhi: نيرُون ڪوٽ).

Hyderabad used to be the capital of Sindh. Now it is the capital of the district of Hyderabad. Before the starting of Pakistan, it was known as the Paris of India, for its roads used to be washed with perfumed rose-water every day and sandalwood incense would linger in the air.

All content from Kiddle encyclopedia articles (including the article images and facts) can be freely used under Attribution-ShareAlike license, unless stated otherwise. Cite this article:
Hyderabad, Sindh Facts for Kids. Kiddle Encyclopedia.