Map of Khorasan and its surroundings in the 7th/8th centuries 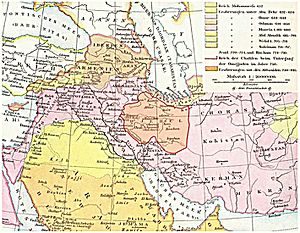 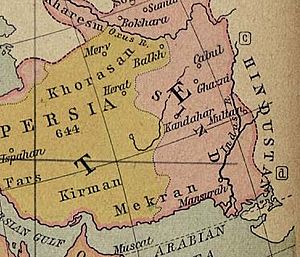 Names of territories during the Caliphate in 750

Khorāsān, sometimes called Greater Khorasan, is a historical region which formed the northeast province of Greater Iran. The name signifies "the Land of the Sun" or "the Eastern Province".

Khorasan comprised the present territories of northeastern Iran, parts of Afghanistan and southern parts of Central Asia. The province was often subdivided into four-quarters, such that Nishapur (present-day Iran), Marv (present-day Turkmenistan), Herat and Balkh (present-day Afghanistan) were the centers, respectively, of the westernmost, northernmost, central, and easternmost quarters. In a strict sense of the term, Khorasan stretched to as far as the Oxus river. However, the name has often been used in a loose sense to include a wider region that included most of Transoxiana (encompassing Bukhara and Samarqand in present-day Uzbekistan), extended westward to the Caspian coast and to the Great Desert Dasht-e Kavir, southward to Sistan, and eastward to Pamir Mountains.

Khorasan was first established as an administrative division in the 6th-century (approximately after 520) by the Sasanians, during the reign of Kavad I (r. 488 – 496) or Khosrow I (r. 531 – 579), which comprised the eastern and north-eastern part of the empire.

Early Islamic usage often regarded everywhere east of the so-called Jibal or what was subsequently termed "Iraq Ajami" (Persian Iraq), as being included in a vast and loosely-defined region of Khorasan, which might even extend to the Indus Valley and the Pamir Mountains. The boundary between these two was the region surrounding the cities of Gurgan and Qumis. In particular, the Ghaznavids, Seljuqs and Timurids divided their empires into 'Iraqi' and 'Khorasani' regions. Khorasan is believed to have been bounded in the southwest by desert and the town of Tabas, known as "the Gate of Khorasan", from which it extended eastward to the mountains of central Afghanistan. Sources from the 10th-century onwards refer to areas in the south of the Hindu Kush as the Khorasan Marches, forming a frontier region between Khorasan and Hindustan. 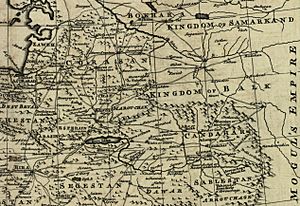 A map of Persia by Emanuel Bowen showing the names of territories during the Persian Safavid dynasty and Mughal Empire of India (ca. 1500–1747)

First established in the 6th-century as one of four administrative (military) divisions by the Sassanids, the scope of the region has varied considerably during its nearly 1,500-year history. Initially, the Khorasan division of the Sassanid empire covered the north-eastern military gains of the empire, at its height including cities such as Nishapur, Herat, Merv, Faryab, Taloqan, Balkh, Bukhara, Badghis, Abiward, Gharjistan, Tus and Sarakhs ..

With the rise of the Umayyad Caliphate, the designation was inherited and likewise stretched as far as their military gains in the east, starting off with the military installations at Nishapur and Merv, slowly expanding eastwards into Tokharistan and Sogdia. Under the Caliphs, Khorasan was the name of one of the three political zones under their dominion (the other two being Eraq-e Arab "Arabic Iraq" and Eraq-e Ajam "Non-Arabic Iraq or Persian Iraq"). Under the Umayyad and Abbasid caliphates, Khorasan was divided into four major sections or quarters (rub′), each section based on a single major city: Nishapur, Merv, Herat and Balkh. By the 10th-century, Ibn Khordadbeh and the Hudud al-'Alam mentions what roughly encompasses the previous regions of Abarshahr, Tokharistan and Sogdia as Khwarasan proper. They further report the southern part of the Hindu Kush, i.e. the regions of Sistan, Rukhkhudh, Zabulistan and Kabul etc. to make up the Khorasan marches, a frontier region between Khorasan and Hindustan.

By the late Middle Ages, the term lost its administrative significance, in the west only being loosely applied among the Turko-Persian dynasties of modern Iran to all its territories that lay east and north-east of the Dasht-e Kavir desert. It was therefore subjected to constant change, as the size of their empires changed. In the east, Khwarasan likewise became a term associated with the great urban centers of Central Asia. It is mentioned in the Memoirs of Babur that:

In modern times, the term has been source of great nostalgia and nationalism, especially amongst the Tajiks of Central Asia. Many Tajiks regard Khorasan as an integral part of their national identity, which has preserved an interest in the term, including its meaning and cultural significance, both in common discussion and academia, despite its falling out of political use in the region. According to Ghulam Mohammad Ghobar, Afghanistan's current Persian-speaking territories formed the major portion of Khorasān, as two of the four main capitals of Khorasān (Herat and Balkh) are now located in Afghanistan. Ghobar uses the terms "Proper Khorasan" and "Improper Khorasan" in his book to distinguish between the usage of Khorasān in its strict sense and its usage in a loose sense. According to him, Proper Khorasan contained regions lying between Balkh in the east, Merv in the north, Sistan in the south, Nishapur in the west and Herat, known as the Pearl of Khorasan, in the center. Improper Khorasan's boundaries extended to as far as Hazarajat and Kabul in the east, Baluchistan in the south, Transoxiana and Khwarezm in the north, and Damghan and Gorgan in the west. 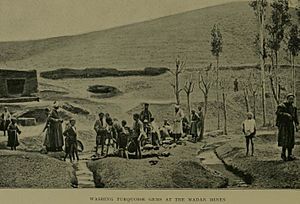 Before the region fell to Alexander the Great in 330 BC, it was part of the Persian Achaemenid Empire and prior to that it was occupied by the Medes. The land that became known as Khorasan in geography of Eratosthenes was recognized as Ariana by Greeks at that time, which made up Greater Iran or the land where Zoroastrianism was the dominant religion. The southeastern region of Khorasan fell to the Kushan Empire in the 1st century AD. The Kushan rulers built a capital in modern-day Afghanistan at Bagram and are believed to have built the famous Buddhas of Bamiyan. Numerous Buddhist temples and buried cities have been found in Afghanistan. However, the region of Khorasan remained predominantly Zoroastrian but there were also Manichaeists, sun worshippers, Christians, Pagans, Shamanists, Buddhists, Jews, Hindus and others. One of the three great fire-temples of the Sassanids "Azar-burzin Mehr" is situated near Sabzevar in Iran. The boundary of the region began changing until the Kushans and Sassanids merged to form the Kushano-Sassanian civilization.

During the Sasanian era, likely in the reign of Khusrow I, Persia was divided into four regions (known as kust Middle Persian), Khwārvarān in the west, apāxtar in the north, nīmrūz in the south and Khurasan in the east. Since the Sasanian territories were more or less remained stable up to Islamic conquests, it can be concluded that Sasanian Khorasan was bordered to the south by Sistan and Kerman, to the west by the central deserts of modern Iran, and to the east by China and India.

In Sasanian era, Khurasan was further divided into four smaller regions, and each region was ruled by a marzban. These four regions were Nishapur, Marv, Herat and Balkh.

Khorasan in the east saw some conflict with the Hephthalites who became the new rulers in the area but the borders remained stable. Being the eastern parts of the Sassanids and further away from Arabia, Khorasan region was conquered after the remaining Persia. The last Sassanid king of Persia, Yazdgerd III, moved the throne to Khorasan following the Arab invasion in the western parts of the empire. After the assassination of the king, Khorasan was conquered by Arab Muslims in 647 AD. Like other provinces of Persia it became a province of the Umayyad Caliphate.

The first movement against the Arab conquest was led by Abu Muslim Khorasani between 747 and 750. Originally from Isfahan, scholars believe Abu Muslim was probably Persian. It's possible he may have been born a slave. According to the Ancient Persian historian Al-Shahrastani, he was a Kaysanite. This revolutionary Shi'a movement rejected the three Caliphs that had preceded Ali.

Abu Muslim helped the Abbasids come to power but was later killed by Al-Mansur, an Abbasid Caliph. The first kingdom independent from Arab rule was established in Khorasan by Tahir Phoshanji in 821, but it seems that it was more a matter of political and territorial gain. Tahir had helped the Caliph subdue other nationalistic movements in other parts of Persia such as Maziar's movement in Tabaristan. 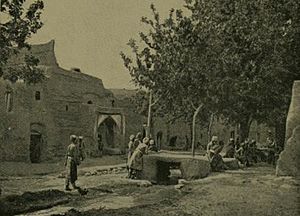 The village of Meyamei in 1909

Between the early 16th and early 18th centuries, parts of Khorasan were contested between the Safavids and the Uzbeks. A part of the Khorasan region was conquered in 1722 by the Ghilji Pashtuns from Kandahar and became part of the Hotaki dynasty from 1722 to 1729. Nader Shah recaptured Khorasan in 1729 and chose Mashhad as the capital of Persia. Following his assassination in 1747, the eastern parts of Khorasan, including Herat was annexed with the Durrani Empire. Mashhad area was under control of Nader Shah's grandson Shahrukh Afshar until it was captured by the Qajar dynasty in 1796. In 1856, the Iranians, under the Qajar dynasty, briefly recaptured Herat; by the Treaty of Paris of 1857, signed between Iran and the British Empire to end the Anglo-Persian War, the Iranian troops withdrew from Herat. Later, in 1881, Iran relinquished its claims to a part of the northern areas of Khorasan to the Russian Empire, principally comprising Merv, by the Treaty of Akhal (also known as the Treaty of Akhal-Khorasan). 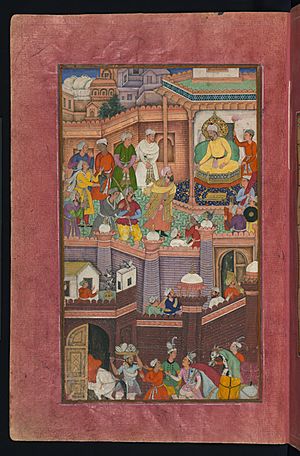 Khorasan has had a great cultural importance among other regions in Greater Iran. The literary New Persian language developed in Khorasan and Transoxiana and gradually supplanted the Parthian language. The New Persian literature arose and flourished in Khorasan and Transoxiana where the early Iranian dynasties such as Tahirids, Samanids, Saffirids and Ghaznavids (a Turco-Persian dynasty) were based. The early Persian poets such as Rudaki, Shahid Balkhi, Abu al-Abbas Marwazi, Abu Hafas Sughdi, and others were from Khorasan. Moreover, Ferdowsi and Rumi were also from Khorasan.

Until the devastating Mongol invasion of the thirteenth century, Khorasan remained the cultural capital of Persia. It has produced scientists such as Avicenna, Al-Farabi, Al-Biruni, Omar Khayyam, Al-Khwarizmi, Abu Ma'shar al-Balkhi (known as Albumasar or Albuxar in the west), Alfraganus, Abu Wafa, Nasir al-Din al-Tusi, Sharaf al-Dīn al-Ṭūsī, and many others who are widely well known for their significant contributions in various domains such as mathematics, astronomy, medicine, physics, geography, and geology. Khorasan artisans contributed to the spread of technology and goods along the ancient trade routes have been traced to this ancient culture, including art objects, textiles and zoomorphic metalworks. Decorative antecedents of the famous "singing bowls" of Asia may have been invented in ancient Khorasan.

All content from Kiddle encyclopedia articles (including the article images and facts) can be freely used under Attribution-ShareAlike license, unless stated otherwise. Cite this article:
Greater Khorasan Facts for Kids. Kiddle Encyclopedia.