The Amu Darya also called the Amu or Amo River, is a major river in Central Asia. It is formed by the junction of the Vakhsh and Panj rivers, in the Tigrovaya Balka Nature Reserve on the border between Tajikistan and Afghanistan, and flows from there north-westwards into the southern remnants of the Aral Sea.

In ancient history, the river was regarded as the boundary between Greater Iran and Turan. 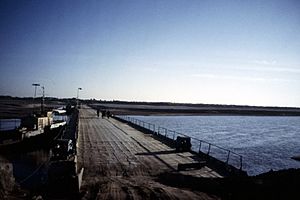 Pontoon Bridge on the Amu River near Urgench

The abundant water flowing in the Amu Darya almost entirely comes from glaciers in the Pamir Mountains and Tian Shan' and does not end at the sea but spreads out into the sands of Turkmenistan's Kyzyl Kum desert instead of the inland Aral Sea as it did in former times.

Standing above the surrounding arid plain, the mountains collect atmospheric moisture which otherwise would probably have escaped somewhere else. Without its mountain water sources, the Amu Darya would not contain any water because it rarely rains in the lowlands that characterize most of the river. Throughout most of the steppe, the annual rainfall is about 300 millimetres (12 in).

It is believed that the Amu Darya's course across the Kara-Kum Desert has gone through several major shifts in the past few thousand years. Much of the time, the most recent period being in the 13th century to the late 16th century, the Amu Darya emptied into both the Aral and the Caspian Seas.

People began to settle along the lower Amu Darya and the Uzboy in the 5th century A.D., establishing a thriving chain of agricultural lands, towns, and cities.

The first British explorer who reached the region was a naval officer called John Wood. He was sent on an expedition to find the source of the river in 1839. He found modern day Lake Zorkul, called it Lake Victoria and proclaimed he had found the source. Then, the French explorer and geographer Thibaut Viné collected a lot more information about this area during five expeditions between 1856 and 1862.

All content from Kiddle encyclopedia articles (including the article images and facts) can be freely used under Attribution-ShareAlike license, unless stated otherwise. Cite this article:
Amu Darya Facts for Kids. Kiddle Encyclopedia.