Kids Encyclopedia Facts
Not to be confused with Bacteria.

Called "beautiful Bactria, crowned with flags" by the Avesta, the region is one of the sixteen perfect Iranian lands that the supreme deity Ahura Mazda had created. 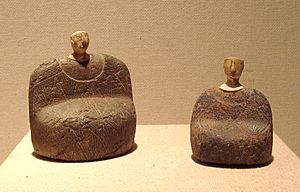 The Bactria–Margiana Archaeological Complex (BMAC, also known as the "Oxus civilization") is the modern archaeological designation for a Bronze Age culture of Central Asia, dated to ca. 2200–1700 BC, located in present-day eastern Turkmenistan, northern Afghanistan, southern Uzbekistan and western Tajikistan, centred on the upper Amu Darya (Oxus River), an area covering ancient Bactria. Its sites were discovered and named by the Soviet archaeologist Viktor Sarianidi (1976).

It was capital of the legendary Kayanian kings of Iran and is mentioned in the Behistun Inscription of Darius the Great.

Bactria was the centre of Iranian resistance against the Macedonian invaders after fall of the Achaemenid Empire in the 4th century BC, but eventually fell to Alexander the Great. After the death of the Macedonian conqueror, Bactria was annexed by his general, Seleucus I.

Nevertheless, the Seleucids lost the region after declaration of independence by the satrap of Bactria, Diodotus I; thus started history of the Greco-Bactrian and the later Indo-Greek Kingdoms.

The Sasanians lost Bactria in the 4th century, however, it was reconquered in the 6th century. With the Muslim conquest of Iran in the 7th century, Islamization of Bactria began.

Bactria was centre of an Iranian Renaissance in the 8th and 9th centuries, and New Persian as an independent literary language first emerged in this region. The Samanid Empire was formed in Eastern Iran by the descendants of Saman Khuda, a Persian from Bactria; thus started spread of Persian language in the region and decline of Bactrian language.

Bactrian, an Eastern Iranian language, was the common language of Bactria and surroundings areas in ancient and early medieval times. Zoroastrianism and Buddhism were the religions of the majority of Bactrians before the rise of Islam.

Bactrians were the inhabitants of Bactria. Several important trade routes from India and China (including the Silk Road) passed through Bactria and, as early as the Bronze Age, this had allowed the accumulation of vast amounts of wealth by the mostly nomadic population. The first proto-urban civilization in the area arose during the 2nd millennium BC.

Control of these lucrative trade routes, however, attracted foreign interest, and in the 6th century BC the Bactrians were conquered by the Persians, and in the 4th century BC by Alexander the Great. These conquests marked the end of the Bactrian independence. From around 304 BC the area formed part of the Seleucid Empire, and from around 250 BC it was the centre of a Greco-Bactrian kingdom, ruled by the descendants of Greeks who had settled there following the conquest of Alexander the Great.

The Greco-Bactrians, also known in Sanskrit as Yavanas, worked in cooperation with the native Bactrian aristocracy. By the early 2nd century BC the Greco-Bactrians had created an impressive empire that stretched southwards to include northwest India. By about 135 BC, however, this kingdom had been overrun by invading Yuezhi tribes, an invasion that later brought about the rise of the powerful Kushan Empire.

The Bactrians spoke Bactrian, a north-eastern Iranian language, descended from Avestan, and most closely related to extinct Khwarezmian, modern Yaghnobi, and Ossetian. The principal religions of the area before Islam were Zoroastrianism and Buddhism.

The Bactrian people, as with the Soghdians, are primarily the ancestors of modern-day Tajiks.

All content from Kiddle encyclopedia articles (including the article images and facts) can be freely used under Attribution-ShareAlike license, unless stated otherwise. Cite this article:
Bactria Facts for Kids. Kiddle Encyclopedia.