The Bactrian deer, also called the Bukhara deer, Bokhara deer or Bactrian wapiti, is a lowland subspecies of red deer that is native to Central Asia. It is similar in ecology to the Yarkand deer in occupying riparian corridors surrounded by deserts. Both subspecies are separated from one another by the Tian Shan Mountains and probably form a primordial subgroup of red Deer. 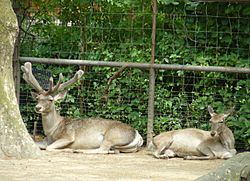 This deer is usually ashy-gray with yellowish sheen, and a grayish white rump patch. It also has a slightly marked dorsal stripe and a white margin of the upper lip, lower lip, and chin.

The antlers are light in color. There are usually four tines, with the absence of bez tine. The fourth tine is better developed than the third. Full grown individuals, however, have five tines on each antler with a bend after the third tine that is characteristic of most Central Asian red deer subspecies.

Bactrian deer have, like Yarkand deer, short tails similar to the short tails of wapitis.

The calves are generally born spotted much like European red deer calves, and most individuals lose their spots by adulthood. However, adult Bactrian deer may have a few spots on the backs of their summer coats.

This deer is found in central Khorasan. It is found in Russian Turkestan (West Turkestan) and adjacent areas in northern Afghanistan to the west of the Tian Shan Mountains. Bactrian deer live in lowland riparian corridors of mixed deciduous (willow/poplar) vegetation surrounded by deserts. They do not migrate but may disperse into adjacent desert areas at night or at times of cooler temperatures.

By 1999 there were not more than 400 Bukhara deer. The population diminished most drastically in Tajikistan because of military conflicts. However, since then, environmental organizations have taken steps to save the species. Moreover, World Wide Fund for Nature (WWF) implemented a reintroduction programme to bring Bukhara deer back to the places which it had once inhabited. For example, Bactrian deer have been reintroduced in Zarafshan reserve in Uzbekistan. As a result, in 2006 there were about 1,000 deer in Central Asia. The largest wild populations were found in 2009 in Karatchingil Nature Reserve (320-350 animals) in the neighborhood of Altyn-Emel National Park in Kazakhstan, in Badai Tugai Nature Reserve (374 animals) in Uzbekistan, and in Tigrovaya Balka Nature Reserve (>150 animals) in Tadjikistan. The total wild population is 1430 and increasing.

Aside from man, the wolf is probably the most dangerous of predators that most Central Asian red deer encounter. Occasionally, the brown bear will prey on these deer as well. Other possible predators are dholes and snow leopards. Eurasian lynx and wild boars sometimes prey on the calves. In the past they were also hunted by the now extinct Caspian tiger.

All content from Kiddle encyclopedia articles (including the article images and facts) can be freely used under Attribution-ShareAlike license, unless stated otherwise. Cite this article:
Bactrian deer Facts for Kids. Kiddle Encyclopedia.