Uzbekistan is a country in Central Asia. Its capital and largest city is Tashkent.

There are about 26,593,000 people living in Uzbekistan. The neighboring countries are Afghanistan, Kazakhstan, Kyrgyzstan, Tajikistan and Turkmenistan. It is a doubly landlocked country, of which there are only two in the world.

Most people in Uzbekistan speak a language called Uzbek, a Turkic language similar to Uyghur and Turkish. In the Uzbek language, Uzbekistan is called "O‘zbekiston" and it means "the land of the true nobles".

Uzbekistan has a long history. Humans first lived in Uzbekistan from before the 2nd millenium BC.

Human rights in Uzbekistan are 'atrocious' according to Human Rights Watch. 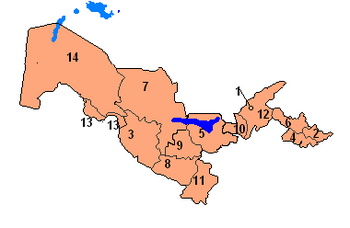 All content from Kiddle encyclopedia articles (including the article images and facts) can be freely used under Attribution-ShareAlike license, unless stated otherwise. Cite this article:
Uzbekistan Facts for Kids. Kiddle Encyclopedia.