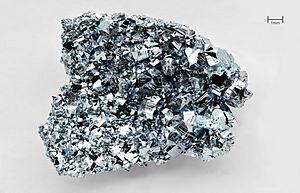 Crystals of osmium, a heavy metal nearly twice as dense as lead.

Heavy metals are metals or chemical compounds containing metals, which are a concern to the environment. This definition was made, when the effects of cadmium, mercury and lead became known. All of these are denser than iron. The definition has since been applied to any other similarly toxic metal, or metalloid such as arsenic, regardless of density. Commonly encountered heavy metals are chromium, cobalt, nickel, copper, zinc, arsenic, selenium, silver, cadmium, antimony, mercury, thallium and lead. More specific definitions of a heavy metal have been proposed; none have obtained widespread acceptance.

All content from Kiddle encyclopedia articles (including the article images and facts) can be freely used under Attribution-ShareAlike license, unless stated otherwise. Cite this article:
Heavy metals Facts for Kids. Kiddle Encyclopedia.