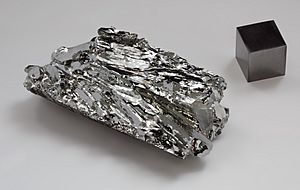 crystalline molybdenum and a 1cm3 cube

Molybdenum is a chemical element. It has the chemical symbol Mo. It has the atomic number 42. It has 35 isotopes. The name Molybdenum is from the Greek meaning "leadlike". The color of pure molybdenum is silvery-white. It does not occur naturally, and is made from molybdenite.

It is used in alloys with other metals like stainless steel. It helps to make metal stronger, especially in high temperatures, and makes it less likely to rust. This makes it good for use in high speed tools, such as drills and saw blades. It is used in aircraft and missile parts, as well as in nuclear reactors. It is also not toxic, so it is used in making metal bowls for use in making food, medicines and other chemicals.

Molybdenum was used for many years before it was identified in 1778 by Swedish scientist, Carl Wilhelm Scheele. In 1782, Peter Jacob Hjelm was able to separate it into a dark powder he called "molybdenum". It was first mined in 1916 at Climax, near Leadville, in Colorado.

All content from Kiddle encyclopedia articles (including the article images and facts) can be freely used under Attribution-ShareAlike license, unless stated otherwise. Cite this article:
Molybdenum Facts for Kids. Kiddle Encyclopedia.