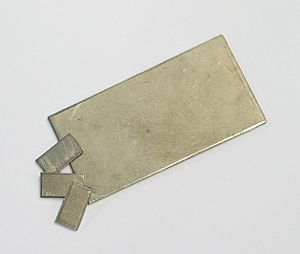 A sheet of niobium

Niobium is a chemical element. It is sometimes named columbium. It has the chemical symbol Nb. It has the atomic number 41. It is a rare metal. Niobium is soft and grey. It is ductile. In chemistry it is placed in a group of metal elements named the transition metals. Niobium was discovered in a variety of a mineral called columbite (now called niobite). Niobite is an ore of niobium.

Niobium is considered a technology-critical element. It is used in alloys, such as to make special steels and strong welded joints. Less than 0.1% of Niobium significantly improves the strength of steel. It is in the superconducting alloys used in MRI scanners, which are one of the most important medical inventions of the modern age.

All content from Kiddle encyclopedia articles (including the article images and facts) can be freely used under Attribution-ShareAlike license, unless stated otherwise. Cite this article:
Niobium Facts for Kids. Kiddle Encyclopedia.