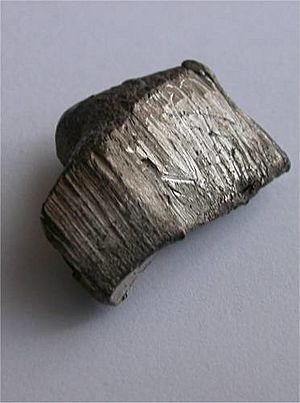 A piece of Ytterbium.

Ytterbium is found in minerals named gadolinite, monazite, and xenotime. In nature it is found as a mix of seven stable isotopes. Ytterbium is used in some steels and is also used to make lasers.

All content from Kiddle encyclopedia articles (including the article images and facts) can be freely used under Attribution-ShareAlike license, unless stated otherwise. Cite this article:
Ytterbium Facts for Kids. Kiddle Encyclopedia.