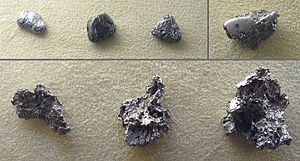 Some platinum nuggets from nature.

Platinum is a soft, heavy, white metal. It is a precious metal. It usually costs more than gold. In chemistry, platinum is element number 78, and its atoms have an atomic weight of 195 a.m.u.. The symbol for platinum is Pt, from Spanish platina meaning "little silver".

The most common use of Platinum is in a vehicle's catalytic converter.

All content from Kiddle encyclopedia articles (including the article images and facts) can be freely used under Attribution-ShareAlike license, unless stated otherwise. Cite this article:
Platinum Facts for Kids. Kiddle Encyclopedia.