Kids Encyclopedia Facts
Not to be confused with Chemical stability. 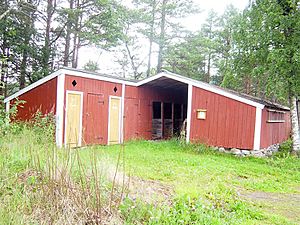 A stable with a few stalls (in Norway))

A stable is a building for livestock animals such as horses or cows to live in.

A stable often has a loft where food such as hay can be kept to feed the animals in the winter. The stable may be divided into enclosures or stalls to keep the animals separate.

A stable may be built near a farmhouse. 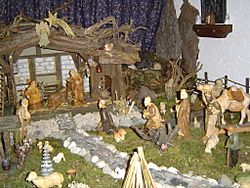 A statue showing the birth of Jesus in a stable

According to the Christian Bible, the baby Jesus was born in a stable. He was wrapped up and put to sleep on the straw in the feed bin (the manger). 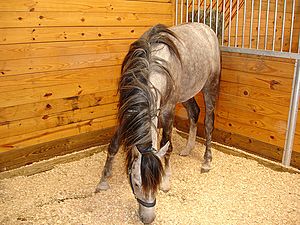 All content from Kiddle encyclopedia articles (including the article images and facts) can be freely used under Attribution-ShareAlike license, unless stated otherwise. Cite this article:
Stable Facts for Kids. Kiddle Encyclopedia.