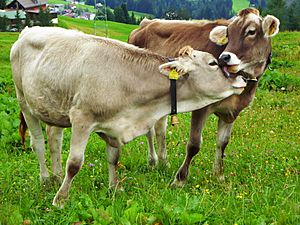 Cattle on a pasture in Germany

Livestock are domestic animals that are kept by people for food, milk, leather, or wool. Some types of livestock are: cattle, pigs, sheep, goats, and chickens. The group is mostly thought to be cows and bulls. Chickens produce eggs, pigs produce ham, bulls make leather for their pelts, goats and cows create milk, and sheep create wool.

In recent years, some organizations have also raised livestock to promote the survival of rare breeds. The breeding, maintenance, and slaughter of these animals, known as animal husbandry, is a component of modern agriculture that has been practiced in many cultures since humanity's transition to farming from hunter-gatherer lifestyles.

Animal husbandry practices have varied widely across cultures and time periods. Originally, livestock were not confined by fences or enclosures, but these practices have largely shifted to intensive animal farming, sometimes referred to as "factory farming". Now, over 99% of livestock are raised on factory farms. These practices increase yield of the various commercial outputs, but have also led to negative impacts on animal welfare and the environment. Livestock production continues to play a major economic and cultural role in numerous rural communities. 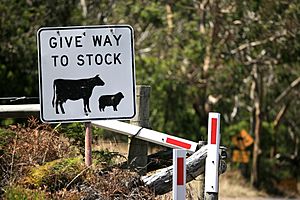 Livestock as a word was first used between 1650 and 1660, as a merger between the words "live" and "stock". In some periods, "cattle" and "livestock" have been used interchangeably. Today, the modern meaning of cattle is domesticated bovines, while livestock has a wider sense.

United States federal legislation defines the term to make specified agricultural commodities eligible or ineligible for a program or activity. For example, the Livestock Mandatory Reporting Act of 1999 (P.L. 106-78, Title IX) defines livestock only as cattle, swine, and sheep, while the 1988 disaster assistance legislation defined the term as "cattle, sheep, goats, swine, poultry (including egg-producing poultry), equine animals used for food or in the production of food, fish used for food, and other animals designated by the Secretary."

Deadstock is defined in contradistinction to livestock as "animals that have died before slaughter, sometimes from illness". It is illegal in many countries, such as Canada, to sell or process meat from dead animals for human consumption.

Animal-rearing originated during the cultural transition to settled farming communities from hunter-gatherer lifestyles. Animals are domesticated when their breeding and living conditions are controlled by humans. Over time, the collective behaviour, lifecycle and physiology of livestock have changed radically. Many modern farm animals are unsuited to life in the wild.

The term "livestock" is nebulous and may be defined narrowly or broadly. Broadly, livestock refers to any breed or population of animal kept by humans for a useful, commercial purpose. This can mean domestic animals, semidomestic animals, or captive wild animals. Semidomesticated refers to animals which are only lightly domesticated or of disputed status. These populations may also be in the process of domestication. 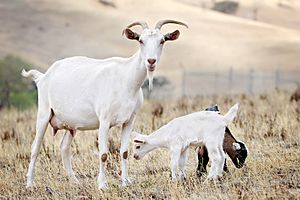 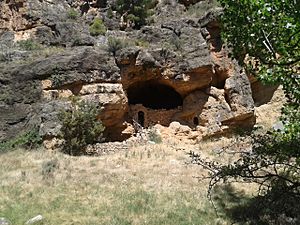 Traditionally, animal husbandry was part of the subsistence farmer's way of life, producing not only the food needed by the family but also the fuel, fertiliser, clothing, transport and draught power. Killing the animal for food was a secondary consideration, and wherever possible its products, such as wool, eggs, milk and blood (by the Maasai) were harvested while the animal was still alive. In the traditional system of transhumance, people and livestock moved seasonally between fixed summer and winter pastures; in montane regions the summer pasture was up in the mountains, the winter pasture in the valleys.

Animals can be kept extensively or intensively. Extensive systems involve animals roaming at will, or under the supervision of a herdsman, often for their protection from predators. Ranching in the Western United States involves large herds of cattle grazing widely over public and private lands.Similar cattle stations are found in South America, Australia and other places with large areas of land and low rainfall. Ranching systems have been used for sheep, deer, ostrich, emu, llama and alpaca. In the uplands of the United Kingdom, sheep are turned out on the fells in spring and graze the abundant mountain grasses untended, being brought to lower altitudes late in the year, with supplementary feeding being provided in winter. In rural locations, pigs and poultry can obtain much of their nutrition from scavenging, and in African communities, hens may live for months without being fed, and still produce one or two eggs a week. At the other extreme, in the more developed parts of the world, animals are often intensively managed; dairy cows may be kept in zero-grazing conditions with all their forage brought to them; beef cattle may be kept in high density feedlots; pigs may be housed in climate-controlled buildings and never go outdoors; poultry may be reared in barns and kept in cages as laying birds under lighting-controlled conditions. In between these two extremes are semi-intensive, often family run farms where livestock graze outside for much of the year, silage or hay is made to cover the times of year when the grass stops growing, and fertiliser, feed and other inputs are bought onto the farm from outside.

Livestock farmers have suffered from wild animal predation and theft by rustlers. In North America, animals such as the gray wolf, grizzly bear, cougar, and coyote are sometimes considered a threat to livestock. In Eurasia and Africa, predators include the wolf, leopard, tiger, lion, dhole, Asiatic black bear, crocodile, spotted hyena, and other carnivores. In South America, feral dogs, jaguar, anacondas, and spectacled bears are threats to livestock. In Australia, the dingo, fox, and wedge-tailed eagle are common predators, with an additional threat from domestic dogs that may kill in response to a hunting instinct, leaving the carcass uneaten. 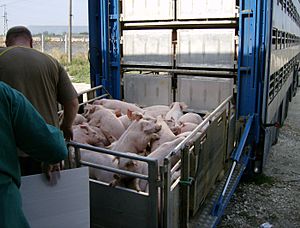 Pigs being loaded into their transport

Since many livestock are herd animals, they were historically driven to market "on the hoof" to a town or other central location. The method is still used in some parts of the world.

Local and regional livestock auctions and commodity markets facilitate trade in livestock. In other areas, livestock may be bought and sold in a bazaar, such as may be found in many parts of Central Asia.

In developing countries, providing access to markets has encouraged farmers to invest in livestock, with the result being improved livelihoods.

In stock shows, farmers bring their best livestock to compete with one another.

All content from Kiddle encyclopedia articles (including the article images and facts) can be freely used under Attribution-ShareAlike license, unless stated otherwise. Cite this article:
Livestock Facts for Kids. Kiddle Encyclopedia.