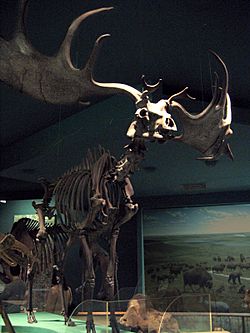 The giant Irish Elk, at the National Museum of Natural History, Washington, D.C. 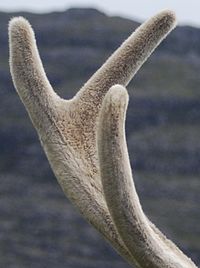 Velvet covers a growing antler and provides it with blood, supplying oxygen and nutrients.

Antlers are usually large, branching structures, made of bone, which grow on the heads of deer and similar animals.

With deer, only males have antlers. Only reindeer (caribou) have antlers on the females, and these are normally smaller than those of the males. 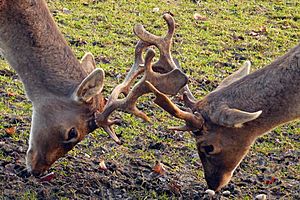 Antlers are unique to cervids. The ancestors of deer had tusks (long upper canine teeth). In most species, antlers appear to replace tusks. However, two modern species (the musk deer and the water deer) have tusks and no antlers and the muntjac has small antlers and tusks.

Antlers are usually found only on males. Only reindeer (known as Caribou in North America) have antlers on the females, and these are normally smaller than those of the males. Nevertheless, fertile does from other species of deer have the capacity to produce antlers on occasion, usually due to increased testosterone levels. The "horns" of a pronghorn (which is not a cervid but a giraffoid) meet some of the criteria of antlers, but are not considered true antlers because they contain keratin. 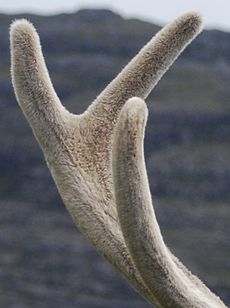 An antler on a red deer stag. Velvet covers a growing antler, providing blood flow that supplies oxygen and nutrients.

While an antler is growing, it is covered with highly vascular skin called velvet, which supplies oxygen and nutrients to the growing bone.

Antlers are one of the most striking cases of male secondary sex characteristics in the animal kingdom. They grow faster than any other mammal bones. Growth occurs at the tip, and is initially cartilage, which is mineralized to become bone. Once the antler has achieved its full size, the velvet is lost and the antler's bone dies. This dead bone structure is the mature antler. The antlers fall off at some point.

To re-grow antlers each year uses up nutrition, so they are honest signals of food gathering capability.

All content from Kiddle encyclopedia articles (including the article images and facts) can be freely used under Attribution-ShareAlike license, unless stated otherwise. Cite this article:
Antlers Facts for Kids. Kiddle Encyclopedia.