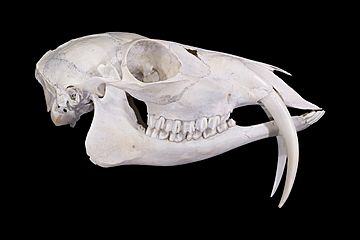 Musk deer are a group of even-toed ungulate mammals. They form the family Moschidae. There are four species of musk deer, but they are all very similar. Musk deer are more primitive than true deer.

Musk deer are about 90 centimeters long and about 60 centimeters high with a tail length of 4-6 centimeters. They weigh about 10 kilograms. Musk deer usually have dark brown fur. Males have long upper canine teeth (called tusks), which can be up to 7 cm long. Musk deer do not have antlers. Male musk deer also have a musk gland.

Musk deer live alone. They only come together to mate. If two male musk deer meet, they fight, during which they can seriously hurt each other with their tusk-like teeth.

The female gives birth to 1-2 babies. A musk deer baby has spots on its fur.

Male musk deer have a gland that produces musk. Musk is used to make perfumes and soap, and it is also used in Traditional Chinese medicine. One musk gland has about 25 to 30 grams of musk. Musk deer have been hunted and killed for its musk. Because of this, musk deer have become fewer and endangered. Anonther method is to catch a living musk deer, take its musk, and let it go free again. This method takes more time, so it is not used often. There are also musk deer farms.

All content from Kiddle encyclopedia articles (including the article images and facts) can be freely used under Attribution-ShareAlike license, unless stated otherwise. Cite this article:
Musk deer Facts for Kids. Kiddle Encyclopedia.