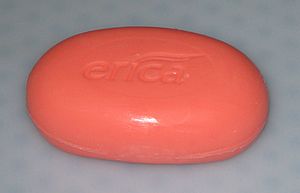 A bar of soap

Soap is a chemical compound resulting from the reaction of an alkali (commonly sodium or potassium hydroxide) with a fatty acid. When mixed with water during bathing or washing, they help people and clothes get clean by lowering the chance of dirt and oil to get to the skin or fabric. Soaps are made from animal fats or vegetable oils. There are two basic steps in making soap. They are called Saponification and Salting-out of soap.

Soap cleans very well in soft water. It is not toxic to water life. It can be broken down by bacteria. However, it is slightly soluble in water, so it is not often used in washing machines. It does not work well in hard water. It cannot be used in strongly acidic solutions. Hand soaps are only acidic enough to remove unwanted skin oils. For other forms of oil, Dishwashing soap is acidic enough to remove almost all forms of oil without damaging other petrolium products such as Plastic. It does not damage skin either. Soap are the metallic salts of long chain fatty acids.

Many soap experts say that soap can be made in many ways. Humanity has used soap-like things for at least 4000 years. The earliest recorded evidence of the making of soap-like materials dates back to around 2800 BC in Ancient Babylon. A recipe for soap having water, alkali and cassia oil was written on a Babylonian clay tablet around 2200 BC.

All content from Kiddle encyclopedia articles (including the article images and facts) can be freely used under Attribution-ShareAlike license, unless stated otherwise. Cite this article:
Soap Facts for Kids. Kiddle Encyclopedia.