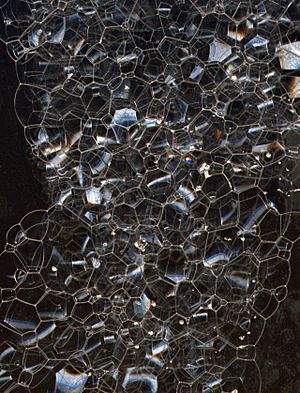 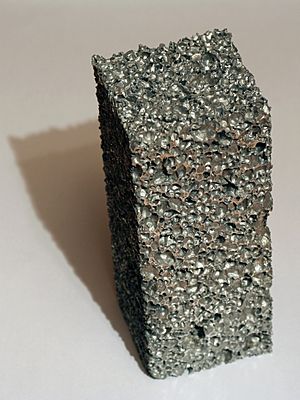 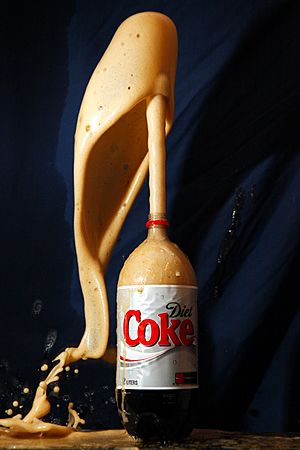 A foam is a substance formed by trapping pockets of gas in a liquid or solid. A bath sponge and the head on a glass of beer are examples of foams. In most foams, the volume of gas is large, with thin films of liquid or solid separating the regions of gas.

Foams are examples of dispersed media. In general, gas is present, so it divides into gas bubbles of different sizes (i.e., the material is polydisperse)—separated by liquid regions that may form films, thinner and thinner when the liquid phase drains out of the system films. When the principal scale is small, i.e., for a very fine foam, this dispersed medium can be considered a type of colloid.

Foam can also refer to something that is analogous to foam, such as quantum foam, polyurethane foam (foam rubber), XPS foam, polystyrene, phenolic, or many other manufactured foams. 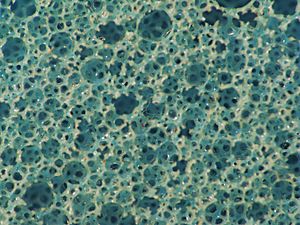 A foam is, in many cases, a multi-scale system.

One scale is the bubble: material foams are typically disordered and have a variety of bubble sizes. At larger sizes, the study of idealized foams is closely linked to the mathematical problems of minimal surfaces and three-dimensional tessellations, also called honeycombs. The Weaire–Phelan structure is considered the best possible (optimal) unit cell of a perfectly ordered foam, while Plateau's laws describe how soap-films form structures in foams.

At lower scale than the bubble is the thickness of the film for metastable foams, which can be considered a network of interconnected films called lamellae. Ideally, the lamellae connect in triads and radiate 120° outward from the connection points, known as Plateau borders.

An even lower scale is the liquid–air interface at the surface of the film. Most of the time this interface is stabilized by a layer of amphiphilic structure, often made of surfactants, particles (Pickering emulsion), or more complex associations.

All content from Kiddle encyclopedia articles (including the article images and facts) can be freely used under Attribution-ShareAlike license, unless stated otherwise. Cite this article:
Foam Facts for Kids. Kiddle Encyclopedia.