Polystyrene is a form of chemical compound that is mainly used for a wide variety of packaging.It is an aromatic polymer made from the monomer styrene, a liquid hydrocarbon that is manufactured from petroleum by the chemical industry. Polystyrene is one of the most widely used plastics, the scale being several billion kilograms per year.

Polystyrene can be in either a thermoset or a thermoplastic form. 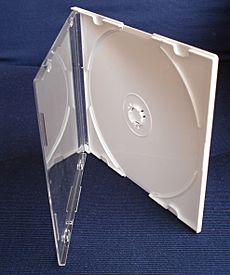 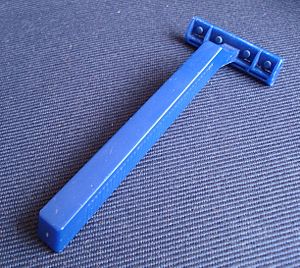 Polystyrene Petri dishes and other laboratory containers such as test tubes and microplates play an important role in biomedical research and science. For these uses, articles are almost always made by injection molding, and often sterilised post-molding, either by irradiation or by treatment with ethylene oxide. Post-mold surface modification, usually with oxygen-rich plasmas, is often done to introduce polar groups. Much of modern biomedical research relies on the use of such products; they therefore play a critical role in pharmaceutical research.

Thin sheets of polystyrene are used in polystyrene film capacitors as it forms a very stable dielectric, but has largely fallen out of use in favor of polyester. 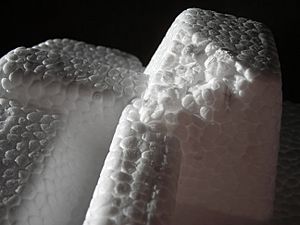 PS foams also exhibit good damping properties, therefore it is used widely in packaging. The trademark Styrofoam by Dow Chemical Company is informally used (mainly US & Canada) for all foamed polystyrene products, although strictly it should only be used for "extruded closed-cell" polystyrene foams made by Dow Chemicals.

Foams are also used for non-weight-bearing architectural structures (such as ornamental pillars). 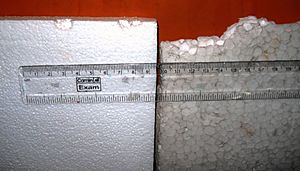 Thermocol slabs made of expanded polystyrene (EPS) beads. The one on the left is from a packing box. The one on the right is used for crafts. It has a corky, papery texture and is used for stage decoration, exhibition models, and sometimes as a cheap alternative to Shola (Aeschynomene aspera) stems for artwork. 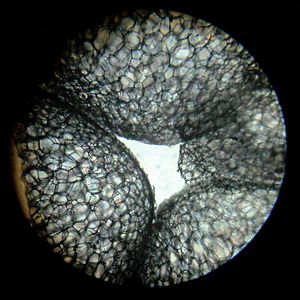 Section of a block of thermocol under a light microscope (bright-field, objective = 10×, eye piece = 15×). The larger spheres are expanded polystyrene beads which were compressed and fused together. The bright, star-shaped hole at the center of the image is an air-gap between the beads where the bead margins have not completely fused. Each bead is made of thin-walled, air-filled bubbles of polystyrene.

Expanded polystyrene (EPS) is a rigid and tough, closed-cell foam with a normal density range of 11 to 32 kg/m3. It is usually white and made of pre-expanded polystyrene beads. EPS is used for food containers, molded sheets for building insulation, and packing material either as solid blocks formed to accommodate the item being protected or as loose-fill "peanuts" cushioning fragile items inside boxes. A significant portion of all EPS products are manufactured through injection molding. Mold tools tend to be manufactured from steels (which can be hardened and plated), and aluminum alloys. The molds are controlled through a split via a channel system of gates and runners. EPS is colloquially called "styrofoam" in the United States and Canada, an incorrectly applied genericization of Dow Chemical's brand of extruded polystyrene.

Sheets of EPS are commonly packaged as rigid panels (Common in Europe is a size of 100cmx50cm, usually depending on an intended type of connection and glue techniques, it is in fact 99.5cmx49.5cm or 98cmx48cm; less common is 120x60cm ; size 4 by 8 or 2 by 8 feet in the United States). Common thicknesses are from 10mm to 500mm. Many customization, additives and thin additional external layers on one or both sides, are often added to help with various properties.

Thermal conductivity is measured according to EN 12667. Typical values range from 0.032 to 0.038 W/(m·K) depending on the density of the EPS board. The value of 0.038 W/(m·K) was obtained at 15 kg/m3 while the value of 0.032 W/(m·K) was obtained at 40 kg/m3 according to the data sheet of K-710 from StyroChem Finland. Adding fillers (graphites, aluminium, or carbons) has recently allowed the thermal conductivity of EPS to reach around 0.030–0.034 (as low as 0.029) and as such has a grey/black colour which distinguishes it from standard EPS. Several EPS producers have produced a variety of these increased thermal resistance EPS usage for this product in the UK & EU.

Water vapor diffusion resistance (μ) of EPS is around 30–70.

ICC-ES (International Code Council Evaluation Service) requires EPS boards used in building construction meet ASTM C578 requirements. One of these requirements is that the oxygen index of EPS as measured by ASTM D2863 be greater than 24 volume %. Typical EPS has an oxygen index of around 18 volume %; thus, a flame retardant is added to styrene or polystyrene during the formation of EPS.

The boards containing a flame retardant when tested in a tunnel using test method UL 723 or ASTM E84 will have a flame spread index of less than 25 and a smoke-developed index of less than 450. ICC-ES requires the use of a 15-minute thermal barrier when EPS boards are used inside of a building.

According to EPS-IA ICF organization, the typical density of EPS used for insulated concrete forms is 1.35 to 1.80 pcf. This is either Type II or Type IX EPS according to ASTM C578. EPS blocks or boards used in building construction are commonly cut using hot wires. 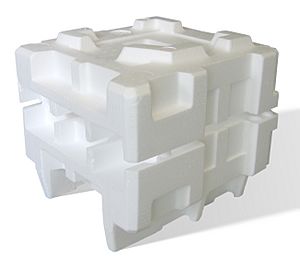 Extruded polystyrene material is also used in crafts and model building, in particular architectural models. Because of the extrusion manufacturing process, XPS does not require facers to maintain its thermal or physical property performance. Thus, it makes a more uniform substitute for corrugated cardboard. Thermal conductivity varies between 0.029 and 0.039 W/(m·K) depending on bearing strength/density and the average value is ~0.035 W/(m·K).

Water vapour diffusion resistance (μ) of XPS is around 80–250.

Waterlogging commonly occurs over a long period of time in polystyrene foams that are constantly exposed to high humidity or are continuously immersed in water, such as in hot tub covers, in floating docks, as supplemental flotation under boat seats, and for below-grade exterior building insulation constantly exposed to groundwater. Typically an exterior vapor barrier such as impermeable plastic sheeting or a sprayed-on coating is necessary to prevent saturation.

Pure polystyrene is brittle, but hard enough that a fairly high-performance product can be made by giving it some of the properties of a stretchier material, such as polybutadiene rubber. The two such materials can never normally be mixed because of the small mixing entropy of polymers (see Flory-Huggins solution theory), but if polybutadiene is added during polymerisation it can become chemically bonded to the polystyrene, forming a graft copolymer, which helps to incorporate normal polybutadiene into the final mix, resulting in high-impact polystyrene or HIPS, often called "high-impact plastic" in advertisements. One commercial name for HIPS is Bextrene. Common applications of HIPS include toys and product casings. HIPS is usually injection molded in production. Autoclaving polystyrene can compress and harden the material.

Several other copolymers are also used with styrene. Acrylonitrile butadiene styrene or ABS plastic is similar to HIPS: a copolymer of acrylonitrile and styrene, toughened with polybutadiene. Most electronics cases are made of this form of polystyrene, as are many sewer pipes. SAN is a copolymer of styrene with acrylonitrile, and SMA one with maleic anhydride. Styrene can be copolymerized with other monomers; for example, divinylbenzene can be used for cross-linking the polystyrene chains to give the polymer used in Solid phase peptide synthesis.

Oriented polystyrene (OPS) is produced by stretching extruded PS film, improving visibility through the material by reducing haziness and increasing stiffness. This is often used in packaging where the manufacturer would like the consumer to see the enclosed product. Some benefits to OPS are that it is less expensive to produce than other clear plastics such as polypropylene (PP), polyethylene terephthalate (PET), and high-impact polystyrene (HIPS), and it is less hazy than HIPS or PP. The main disadvantage to OPS is that it is brittle, and will crack or tear easily.

Polystyrene foams are produced using blowing agents that form bubbles and expand the foam. In expanded polystyrene, these are usually hydrocarbons such as pentane, which may pose a flammability hazard in manufacturing or storage of newly manufactured material, but have relatively mild environmental impact. Extruded polystyrene is usually made with hydrofluorocarbons (HFC-134a), which have global warming potentials of approximately 1000–1300 times that of carbon dioxide.

Discarded polystyrene does not biodegrade for hundreds of years and is resistant to photo-oxidation.

Animals do not recognize polystyrene foam as an artificial material and may even mistake it for food. Polystyrene foam blows in the wind and floats on water, due to its low specific gravity. It can have serious effects on the health of birds or marine animals that swallow significant quantities.

Restricting the use of foamed polystyrene takeout food packaging is a priority of many solid waste environmental organisations. Efforts have been made to find alternatives to polystyrene, especially foam in restaurant settings. The original impetus was to eliminate chlorofluorocarbons (CFC), which was a former component of foam.

All content from Kiddle encyclopedia articles (including the article images and facts) can be freely used under Attribution-ShareAlike license, unless stated otherwise. Cite this article:
Polystyrene Facts for Kids. Kiddle Encyclopedia.