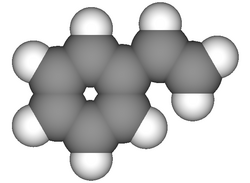 Styrene is a certain organic chemical compound having the chemical formula C8H8. Its chemical structure is made up of a vinyl group bonded onto a benzene ring. This benzene ring makes styrene an aromatic compound. At room temperature and pressure, styrene is a clear, colorless liquid. Other names for styrene can be styrol, vinylbenzene, phenylethene, or phenylethylene.

Styrene is used in polymer chemistry as a monomer. This means many styrene molecules can bond together to make a larger molecule called polystyrene. Polystyrene is a kind of polymer often used as a plastic. This kind of chemical reaction is called polymerization.

Styrene can also bond with other kinds of monomers to make other kinds of polymers called copolymers. For one example, styrene has been mixed with another monomer called 1,3-butadiene to make a copolymer which is a kind of synthetic rubber. For another example, styrene is mixed with acrylonitrile and 1,3-butadiene to make a copolymer plastic called ABS (Acrylonitrile-Butadiene-Styrene).

In industry, styrene is made from ethylbenzene by this chemical reaction: 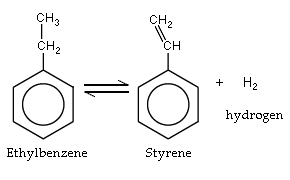 This kind of reaction is called dehydrogenation. Hydrogen is also made by this reaction..

All content from Kiddle encyclopedia articles (including the article images and facts) can be freely used under Attribution-ShareAlike license, unless stated otherwise. Cite this article:
Styrene Facts for Kids. Kiddle Encyclopedia.