Some non-benzene-based compounds called heteroarenes, which follow Hückel's rule, are also aromatic compounds. In these compounds, at least one carbon atom is replaced by one of oxygen, nitrogen, or sulfur.

Benzene, C6H6, is the simplest aromatic hydrocarbon and was recognized as the first aromatic hydrocarbon, with the nature of its bonding first being recognized by Kekulé in the 19th century. Each carbon atom in the hexagonal cycle has four electrons to share. One goes to the hydrogen atom, and one each to the two neighboring carbons. This leaves one to share with one of its two neighboring carbon atoms, which is why the benzene molecule is drawn with alternating single and double bonds around the hexagon.

The structure is also illustrated as a circle around the inside of the ring to show six electrons floating around in delocalized molecular orbitals the size of the ring itself. This also represents the equivalent nature of the six carbon-carbon bonds each equivalent to ~1.5. The electrons are visualized as floating above and below the ring with the electromagnetic fields they generate acting to keep the ring flat.

The circle symbol for aromaticity was introduced by Sir Robert Robinson and his student James Armit in 1925 and popularized starting in 1959 by the Morrison & Boyd textbook on organic chemistry. The proper use of the symbol is debated; it is used to describe any cyclic pi system in some publications, or only those pi systems that obey Hückel's rule on others.

A reaction that forms an arene compound from an unsaturated or partially unsaturated cyclic precursor is simply called an aromatization. Many laboratory methods exist for the organic synthesis of arenes from non-arene precursors.

Aromatic compounds play key roles in the biochemistry of all living things. The four aromatic amino acids histidine, phenylalanine, tryptophan, and tyrosine each serve as one of the 20 basic building blocks of proteins. Further, all 5 nucleotides (adenine, thymine, cytosine, guanine, and uracil) that make up the sequence of the genetic code in DNA and RNA are aromatic purines or pyrimidines. As well as that, the molecule heme contains an aromatic system with 22 π electrons. Chlorophyll also has a similar aromatic system.

Aromatic compounds are important in industry. Key aromatic hydrocarbons of commercial interest are benzene, toluene, ortho-xylene and para-xylene. About 35 million tonnes are produced worldwide every year. They are extracted from complex mixtures obtained by the refining of oil or by distillation of coal tar. They are used to produce a range of important chemicals and polymers, including styrene, phenol, aniline, polyester and nylon.

Almost all aromatic compounds are compounds of carbon, but they need not be hydrocarbons.

In heterocyclic aromatics one or more of the atoms in the aromatic ring is of an element other than carbon. Examples include pyridine, pyrazine, imidazole, pyrazole, oxazole, and thiophene. 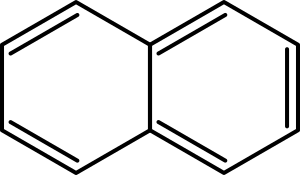 Many chemical compounds are aromatic rings with other things attached. Examples include trinitrotoluene (TNT), acetylsalicylic acid (aspirin), paracetamol, and the nucleotides of DNA.

All content from Kiddle encyclopedia articles (including the article images and facts) can be freely used under Attribution-ShareAlike license, unless stated otherwise. Cite this article:
Aromatic hydrocarbon Facts for Kids. Kiddle Encyclopedia.