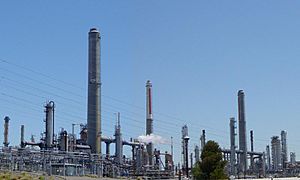 Oil refineries are one way hydrocarbons are processed for use. Crude oil is processed in several stages to form desired hydrocarbons, used as fuel and in other products.

A hydrocarbon is a type of chemical compound. It is made of only hydrogen and carbon atoms. They can be found in crude oil and are separated by fractional distillation (which means they are separated into different groups). The hydrogen and carbon are bonded with non-polar covalent bonds. Because of its lack of polar covalent bonds, hydrocarbons cannot create hydrogen bonds with water and are hydrophobic.

Hydrocarbons are grouped into "families" or "homologous series". There are five main families. The hydrocarbons in each family have a general formula and similar chemical properties, and similar trends in physical properties. This system was approved in 1892 by the International Congress of Chemists, meeting in Geneva.

Alkanes are the simplest hydrocarbons. Their general formula is CnH2n+2.

Alkenes are similar to alkanes. The main difference between them is that alkenes have a carbon to carbon double bond. The general formula for the alkenes is CnH2n.

Note that there is no "Methene". Methene is not possible as alkenes require a carbon-carbon double bond and methane only has one carbon atom.

Alkynes have a carbon to carbon triple bond. CnH2n-2 is their general formula.

"Methyne" does not exist because of methane's one carbon atom.

Cycloalkanes are isomers of alkenes. They have the same general formula (CnH2n), the only difference is that they do not have a carbon to carbon double bond.

Note that the alkane Methane and the alkene Ethene do not have a cycloalkane because they can only form a straight line.

Alkadienes have two carbon to carbon double bonds. Their general formula is CnH2n-2. They are isomers of Alkynes.

Aromatic hydrocarbons are aromatic organic molecules that form flat ring-shaped bonds. The most simplest of aromatic hydrocarbons are benzene and indole. They can have one ring, heterocyclic, like benzene or 2 rings, bicyclic like napthalene (primary ingredient in mothballs) or many rings, polycyclic like anthracene (red dye colourant). Their general formula is CnH2n-6, where n is a number greater than or equal to 6.

All content from Kiddle encyclopedia articles (including the article images and facts) can be freely used under Attribution-ShareAlike license, unless stated otherwise. Cite this article:
Hydrocarbon Facts for Kids. Kiddle Encyclopedia.