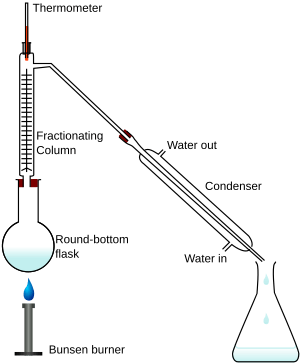 A conical flask is used as a receiving flask. Here the distillation head and fractionating column are combined in one piece.

Fractional distillation is a process of separating a mixture of chemical compounds. This means that each part (called a "fraction") of the mixture can be kept apart from the other chemicals. Different chemicals have different boiling points. Fractional distillation is done by heating the mixture so that each fraction evaporates and then condenses in its own compartment.

It is a special type of distillation. Generally the component parts boil at less than 25°C from each other under a pressure of one atmosphere (ATM). If the difference in boiling points is greater than 25°C, a simple distillation is used.

This is carried out by boiling a mixture in a fractionating column. The mixture will evaporate at different times, and is then caught in a container as a pure compound.

Fractional distillation is how petroleum is refined.

All content from Kiddle encyclopedia articles (including the article images and facts) can be freely used under Attribution-ShareAlike license, unless stated otherwise. Cite this article:
Fractional distillation Facts for Kids. Kiddle Encyclopedia.